I'll be talking Sparkle Science on The Morning AMp on Vocalo and then The Afternoon Shift on WBEZ on Wednesday.

On Monday I threw in my two cents on the "Sparkle Science" debate via an op-ed published by USA TODAY. Overall I've received positive feedback and more "thank yous!" than I expected. But in the midst of writing on deadline, I missed a few things, but I want to address the only push back I've read...so far.

The first is that I framed the conversation in too much of a bifurcation of girlhood/femininity. I should know better as my daughter is certainly a tutu-wearing skinned-knee girl. OK, I can't recall the last time she wore a tutu, but she's a girly girl who also kicks ass on the soccer field.

That was the point I was trying to get across. Girls these days are much better at the fluidity of femininity than any of us were at their ages, hell even now!

Second, while I am against most sex-segregated activities, I am a proud Girl Scout and a volunteer for my daughter's troop. There are sometimes a place for girl- or boy-only spaces. Also, the idea that Boy Scouts and Girl Scouts had separate workshops most likely stems from badge requirements. When we have attended museums for workshops, they tailor the activities to ensure we hit all the requirements for our badge. I assume the same with the Boy Scouts.

And as Michael Story pointed out on Twitter (I saw this after my op-ed was live), the Carnegie Science Center does offer a variety of science programs for girls with & without sparkle:


Another lesson in retweet bait: the full page of that 'science with a sparkle' leaflet pic.twitter.com/sYp665fWyf
— Michael Story (@MWStory) October 6, 2014

Going to show that sometimes a photo is worth a thousand words, but the whole photo says even more. Of course the full photo does not excuse the sole offering for Girl Scouts.

Lastly...since a photo is worth a thousand words, here's the photo of the letter my friend's daughters received from GoldieBlox. OK, so I got axels and bloxes mixed up, sue me! 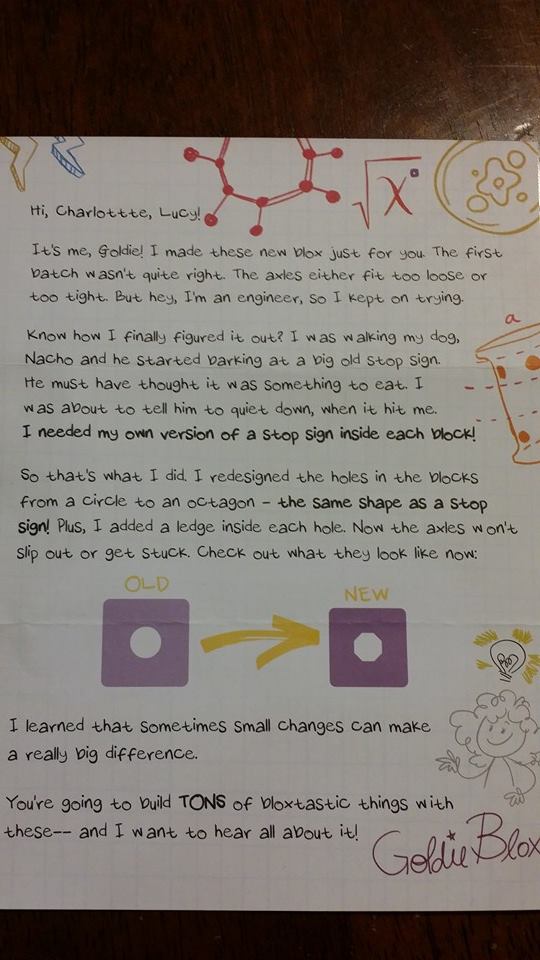