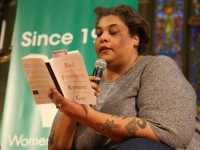 Nearly three hundred bad feminists gathered at the Chicago Temple on December 10 to hear New York Times best-selling author Roxane Gay discuss issues around feminism, inequality, and the struggles that 21st century women still face at an event hosted by Women Employed. Gay’s commentary and criticisms on Wednesday were in line with those found in her recent book Bad Feminist—incisive and insightful, covering a broad range of topics with her signature quick-witted sense of humor. Some highlights from the evening:

On the wage gap: “Women have compromised enough! 77 cents is a compromise. Pay me a dollar, you asshole!”

On burning out in social services and activism: “Self-care is a priority. You must decide how much self care you need. If you burn out, then you’re not doing anything. If you’re not here, you can’t do any good in the world.”

On not always having an opinion: “Sometimes it’s Tuesday and I’m thinking about macaroni and cheese.”

On privilege: “Saying that you have privilege does not mean that you do not have suffering.”

On intersectional feminism: “Feminism is so much more complicated than just gender. If good feminism is only about middle class white women, then I don’t want to be a part of that feminism.”

As Gay points out, there are̶—or at least there should be—as many different kinds of feminism as there are different kinds of people. A problem emerges, however, when one type of feminism comes to stand in for all types of feminism—when one approach or perspective claims to authoritatively represent all perspectives. Broadly speaking, mainstream feminist movements have left behind women of color, low-income women, and LGBTQA women. As Gay writes, feminism is certainly flawed, but it is flawed because it is a movement powered by people who are also inherently flawed.  At its best, feminism has the potential to offer a way to navigate our shifting cultural climate and to help women find their voices, which is what we find in Gay’s work.

Bad Feminist is easily one of the best books I’ve read this year. Gay’s writing is accessible and her tone approachable, yet her criticisms are articulate and pointed, as she never waters down the complexity of her arguments. In fact, one of Gay’s greatest strengths as an author and speaker is her ability to personally connect with her audience, allowing her to present highly sophisticated and nuanced social critiques without alienating anyone through the use of jargon-laden language, as may be the case with fellow academics (Gay is a professor at Purdue University). After all, what good is critical cultural commentary if someone needs a PhD to understand and respond to it? We need clear and discerning voices like Roxane Gay’s to serve as models and encourage us all to look much more critically at the world around us. Furthermore, the breadth of issues that Gay addresses in Bad Feminist speaks to the landscape of today’s feminism—complex, rapidly developing, contested, and above all, still necessary.

Sure, things have improved for some women, but they have not improved enough, particularly not for women who are not highly educated, straight, middle-class, able-bodied, documented, and white. When women hold less than 20% of seats in Congress, when popular music boasts lyrics like “I know you want it,” when 1 in 5 women are raped or sexually assaulted in college, when there were over a thousand bills proposed in 2011 that intended to limit women’s ability to access an abortion (200 of which passed), when white women earn 77 cents, black women 64 cents, and Latina women 53 cents to every man’s dollar, how can anyone really say that feminism is irrelevant? At this point, we should not be questioning the relevance of feminism, but rather, we should be rolling up our sleeves and asking, “Where do we even start?”

And this is no easy question. During the question and answer at Women Employed’s event, an audience member asked Roxane how to know when to pick your battles. After all, the problems are complex and numerous, and most of us only have a finite amount of time, energy, and resources that we can dedicate to the causes we believe in. Gay’s advice was simple, but powerful:

Use your voice where it will do the most good.

You can’t do everything, but you can do something. No matter where you live, what you do for a living, or how much time or money you have, there is a unique way that you can contribute to social change. Do you have a bit of financial flexibility? Make a donation to a women’s nonprofit (such as Women Employed). Do you have expertise in your field? Mentor younger women or donate your time and knowledge by serving on a council or board. Even more importantly: do you have a voice? Speak up, and do so as often as you can. Do you have ears? Listen to others who have experiences and perspectives different from your own. If nothing else, be proactive and stay informed about what’s going on. Sure, things are better than they were a generation or two ago, but as Gay aptly puts it, “Better is not good enough, and it’s a shame that we would settle for so little.”

Here’s the truth: all feminists are bad feminists. We’re imperfect, and our feminisms are imperfect. As individuals, we each have limited perspectives. We contradict ourselves. We make mistakes. We’re human. But does that mean we abandon feminist causes? Definitely not, because then we’re really in trouble. We do the best we can with what we know, we get challenged when someone disagrees, we pay attention and remain open to new perspectives, and then when we know better, we do better. We may all be bad feminists, but it’s up to bad feminists to keep fighting the good fight.

Rachel Clark studies Women’s and Gender Studies at Carleton College in Northfield, MN. In December, she had the opportunity to intern with Women Employed, a Chicago-based nonprofit organization that advocates for increased educational and employment opportunities for working women. She aspires to one day be a professional feminist.
Labels: books guestpost women work