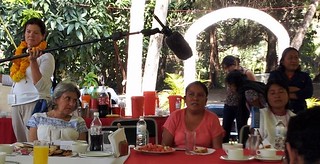 Today is the day the Nobel Peace Prize is awarded. While recent awards have been controversial, today Malala Yousafzai receives the award for her work advocating for the education of girls, along with Kailash Satyarthi an advocate for children's rights. I'm the type of person who believes all our issues are connected, interconnected and intersectional.

In that spirit I share with you a three-part series based on the Nobel Women's Initiative delegation to Mesoamerica I traveled with in 2012. These films are an excellent representation of the whole delegation. In these films you will meet women who are feminists fighting for their homes and families. Far too often the media in the USA depicts Mexico and Central America as lost lands. The framing of Central American children fleeing from their homes is sometimes seen as fleeing from countries that cannot be saved. Yet these women are fighting to reclaim or retain what has been their land for longer than one can imagine. Take a moment to watch at least one film today. Save the others for later.