The Power to Offend: Why Dan Bernstein Says What He Says

Wednesday night, Bernstein took to Twitter to question the ability of a woman sports reporter's abilities. He woke up the next morning with a Twitter hangover. But unlike the young man who called Mo'ne Davis a slut, so far Bernstein has gotten off scott-free.

The Chicago Tribune reports that "Bernstein admitted on air he didn't realize he was in the middle of a blazing social media firestorm until he woke up Thursday morning. Only then did it hit him that making Twitter comments about a woman sports anchor's appearance probably wasn't a good career move." Ya, think? 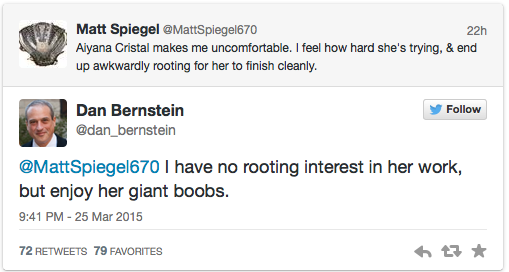 Since he joined the radio station in 1995, we can assume that he is not a teenage boy unaccustomed to seeing women or women's body parts. So what would make a grown man say something, never mind it was on Twitter, about a colleague's appearance in such a gross manner?

As a white male in a white male dominated industry, he has immense power. He has also been the co-host of his current show since 1999. That means that the powers that be at WSCR know him very well and appreciate his work. That gives him more power. This type of institutional power exhibits itself in many ways in other arenas - this is what gives people the sense of invincibility and they are often correct. We are far more a society of forced apologies than having real conversations about what the offense really was about.

This is why the Starbucks "Race Forward" campaign was such a flop. As a society, we have little skills to talk about racism, sexism, homophobia and all the other 'isms a rational level that does not involve those in power (usually white heterosexual men) to be offended.

For me, as someone who studies organizations and why some continue to be safe havens for racism and sexism, the first thing I wanted to see if there were any women on-air at the station. Here are the line-ups: 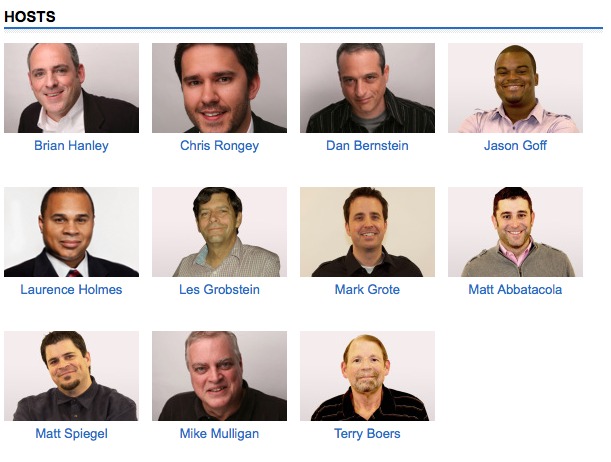 OK...maybe not hosts. I get that women are often the side-kick or side-line reporter, let's see what that looks like: 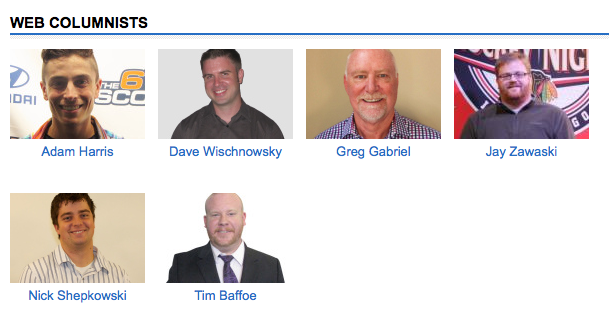 And then I noticed a link above the hosts line up.

Oh....So yes, I clicked right on over. In a simple PDF form, you can see how CBS hired all their openings for one year. I restricted my quick research project to WSCR. Over the course of July 23, 2013 – July 22, 2014, they hired eight individuals.

And you get to see where they got their interviewed candidates. I could not find information on their actual resume pool, but given what we know of the job market, I think it safe to say there were more than 54 applicants for eight openings. And where did WSCR get their interviewees from?

And 100% of the jobs were filled with people who were referred to the openings or internal candidates. It is true that it is who you know!

Back to Bernstein...People are now wondering what should happen. Fired? Suspended? Whichever is fine with me. But what we really should be talking about is how did a radio station, even a sports radio station, get to where there are NO women on their photo staff roster? Well, I think I just showed you.

When you rely on internal and personal networks to fill open positions, you often replicate what you already have. The way humans works is that we too often associate with people who look just like us. It is comforting. Which is why some organizations make it harder for those in hiring to hire who they know. It does not always work, but at least it pushes people to reach outside their inner circle to look for applicants. And given the long list of diverse organizations that the ads were listed in, there should had been applicants who were good enough for an interview.

Organizational culture is very hard to change. But it can change with enough will from the top. I know some will wave off this incident as just more frat boy sports radio antics and they are right, But it does not mean we should ignore it. Women are sports journalists and they deserve a workspace that is respectful of them as human beings. It can be done, but not if we focus on apologies instead of actions.
Labels: media sports