Book Review: It Runs in the Family by Frida Berrigan 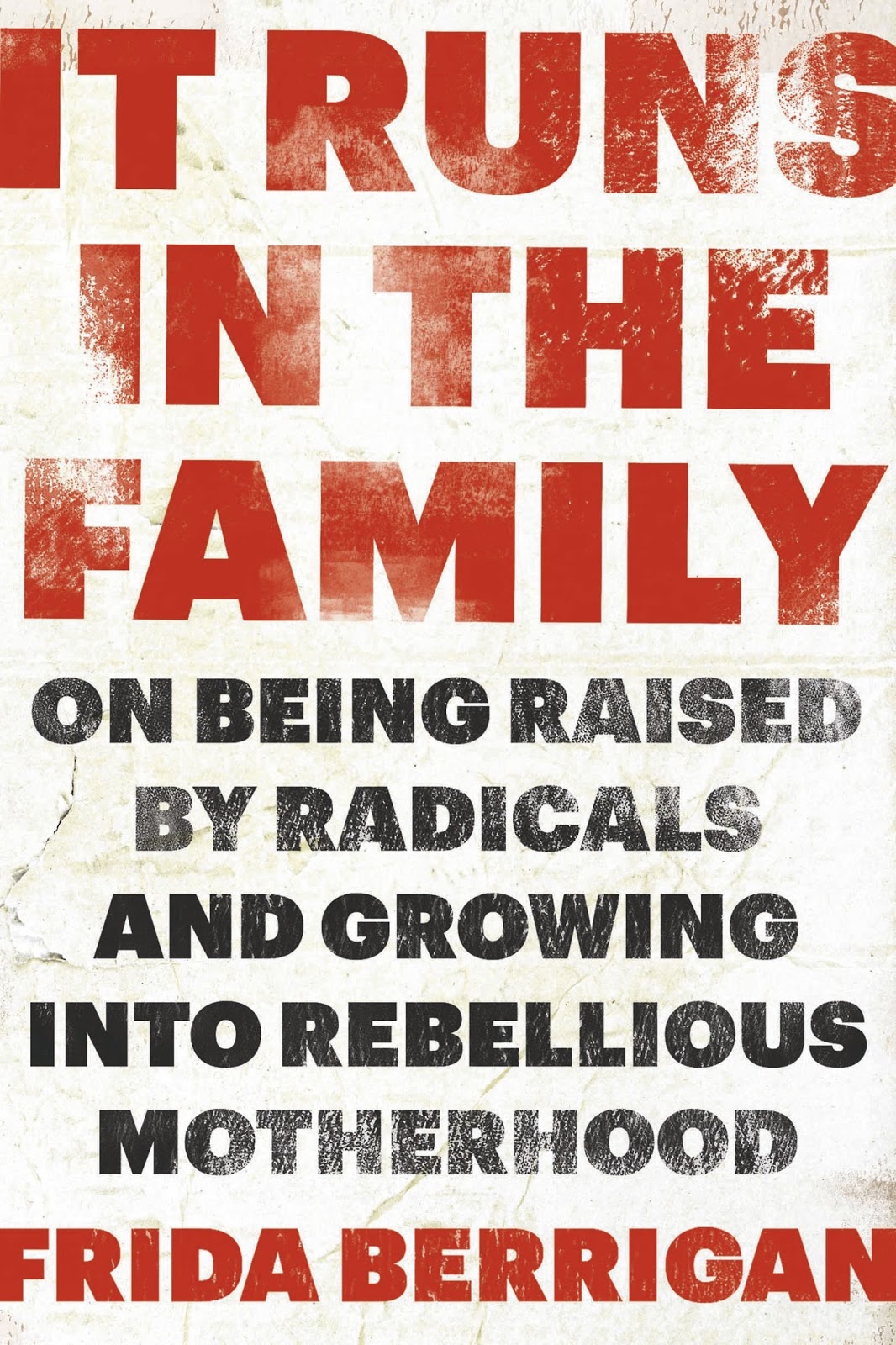 Half way through Frida Berrigan’s contribution to mom lit, It Runs in the Family: On Being Raised by Radicals and Growing Into Rebellious Motherhood, I thought this was the best book ever. I even said in my Goodreads update that it was so good that I could put my aspirations of writing a book on motherhood to bed. Now that I am done with her part-mothering book, part-memoir, I can say that I still might give mine a go, but this is certainly one the best books about raising children I have ever read.

Berrigan is the daughter of acclaimed peace activist Philip Berrigan. Some of us might know his name from the Dar Williams song, I Had No Right, which depicts Phillip and his brother Daniel’s trial for burning draft cards. Frida was raised in strict accordance to her parents’ dedication to the peace movement which included a commitment to living as simply as possible and shunning good ole’ fashioned American consumerism. As a former priest and nun, Frida’s parents also raised them to live by Jesus’ example. This meant working for social justice on behalf of the poor and oppressed, not condoning homosexuality and women’s rights. As I have heard many a Catholic say, they lived according to Jesus’ actions not the Church’s teachings.

As someone who has tried very hard to raise my daughter from a feminist perspective, I admire how well Frida and her husband have maintained their commitment to living according to their beliefs. They maintain a family on one salary in order to stay just below an income level that relieves them from paying any income taxes to the government. Thus they are not supporting the war efforts through this mechanism. This vow of sustainable living means that Frida can mention her ancient flip-phone and the fact her children have little technology in their lives. “What does that look like in practice? Potluck dinners, composting, knowing our neighbors, belong to the community garden and the food cop-op…” and her list goes on to mention every hippie parent stereotype.

If that seems judgmental, I concur. There were plenty of places where I felt Frida is lecturing us smart phone-social media addicted parents into living simpler lives. I don’t disagree with her assessment either. Most of my friends with kids know we too often open up our phones when we should be enjoying family time. It can be difficult to then ask one’s child to then be “polite” with their smart phone when they grew up watching you on yours. Ahem…In fact Frida’s book may be the thing that keeps you from looking at your phone 10 times during soccer practice and only a few times.

I have been asked many times over my tenure as a mom how one is a feminist mom. What Frida does with her book is to outline how one is not just a feminist mom, but one that centers daily living around peace and justice. She connects many of our daily actions (gadget lust) to its place in the overall system that continues to keep poor people in poverty, but also has destroyed the middle class. Instead of dismissing the book as a piece of judgmental crap, I find it quite aspirational. What are we doing to ourselves, our family, and our community when we strive for the bigger paycheck, latest phone, and private lessons for our children?

Frida not only reflects on her upbringing the sacrifices her family made in their quest for social justice, but also the state of our society. As a child, Frida’s parents were often the front lines of many peace demonstrations and committing acts of nonviolent disobedience. Her parents were often arrested and spent time in prison. Her recollection of the one time they were both in prison at the same time and left in the care of friends is heartbreaking. After that mistake, her parents made sure to never be incarcerated at the same time again. While some might question ever being arrested while raising children, Frida makes a point to defend her parents political strategies as part of their parenting style. When one becomes a parent, the rest of our self does not die. We may be more careful, but we cannot stop being who we are just because we brought a life into the world. It is a delicate balance that Frida describes well.

And that is the flip of Frida’s judgmental look at parenting. She spends a good amount of time reliving us from modern parenting guilt. Her take on the insanity that is children’s birthday parties is spot on. The state of having to have an equally opulent party from the last kid is only teaching our children to buy bigger and better toys than their classmate. One that parents will wish we hadn’t taught then when the toys start to cost hundreds of dollars.

As militant as you may start to think Frida is with her dedication to a social justice parenting style, her admission as to rebellious ways is heartwarming. As a child the family did not allow a lot of TV time, yet she admits to sneaking TV at friends’ homes and lying about it. Yes, instead of becoming right-wingers, Frida and her brother watch TV. But within this admission, Frida asks us to acknowledge that “children are little insurrectionists” and to stop and learn from their rebellions instead of clamping down on the situation. Again, another lesson to keep in mind as my husband and I begin our journey of parenting a teenager

But this lesson is also a moment where Frida asks us to look at our beliefs and actions. Is it more important for us to have our children use the correct terminology or to act in a socially just and feminism manner? What good is it for us to teach our children the “political correct” way to refer to people if they never interact with people outside their homogenous social circle?

I like to say that I am a feminist who constantly tries to connect the dots, that my commitment to reproductive justice is more than just abortion rights. The way that Frida tackles issues is very similar. As she begins to wax on about the state of women's health in relation to birthing in the USA, she quickly whips it back to the so-called "right to life" community and their lack of action on behalf of children's rights.

Best of all, Frida is forthright about how children turn our lives upside down, but we wouldn't have it any other way. Ok, sure we would want a better child care system, paid maternity leave and all that, but the whole juggle is tough, but can be pretty awesome too. "It Runs in the Family" is a refreshing take on parenting while pursuing social justice in the world.

Disclaimer: I received a copy for review from a publicist.
Labels: books motherhood reviews