Join me for #STEMchat with SciGirls on May 21! 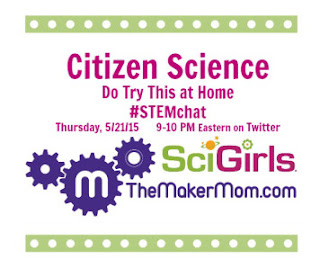 As long-time readers know, my paying job is to support women who are studying science, technology, engineering and mathematics (STEM). I often get asked what the magic key or silver bullet is for getting more girls into STEM. While the actual answer is complex and nuanced, when I am talking with parents it usually ends up being, "Let them break things & get dirty." This is why I am excited to invite you to join me for #STEMchat with SciGirls on May 21st about citizen science. I love the tagline, "Do Try This at Home," because that is such a key to the puzzle! Do science at home. Demystify it. You don't have to be a genius to do science. And I'm super excited to be chatting with SciGirls.

Now in its third season, SciGirls features real-life girls and mentors engaging in science, citizen science. As the SciGirls track toads and count clouds, they also hope to inspire SciGirls (and SciBoys) to join the citizen science movement. Citizen science invites children and their families to make key observations as well as record and share data on large-scale research projects run by real scientists. It’s a fun way for the entire family to participate in the scientific process. Some citizen science projects run for so many years, that participation in them can easily become a family tradition.

Speaking of families, PBS Parents has a bunch of STEM-sational resources, including an overview of SciGirl episodes and extension activities you can do at home.

I'm on an awesome panel of grown-up SciGirls to help lead the #STEMchat on Citizen Science:

@SciGirls, SciGirls is an Emmy Award-winning PBS KIDS TV show, website and outreach program that seeks to change how girls think about STEM.

@CoopSciScoop, Caren Cooper, a bird-loving biologist and blogger who is literally writing the book on citizen science.

Spread the news to your STEM-loving friends and colleagues. Share the #STEMchat joy with these sample tweets!

*Join me for #STEMchat with @Veronicaeye and @SciGirls on Twitter 5/21 at 9 PM!