POV returns on June 22nd with "Out in the Night"

In 2006, under the neon lights of a gay-friendly neighborhood in New York City, a group of African-American lesbians were violently threatened by a man on the street. The women fought back and were later charged with gang assault and attempted murder. The tabloids quickly dubbed them a gang of "Killer Lesbians" and a "Wolf Pack." Three pleaded guilty to avoid a trial, but the remaining four — Renata, Patreese, Venice and Terrain — maintained their innocence. The award-winning Out in the Night examines the sensational case and the women's uphill battle, revealing the role that race, gender identity and sexuality play in our criminal justice system. A co-production of ITVS. A co-presentation with the National Black Programming Consortium (NBPC). 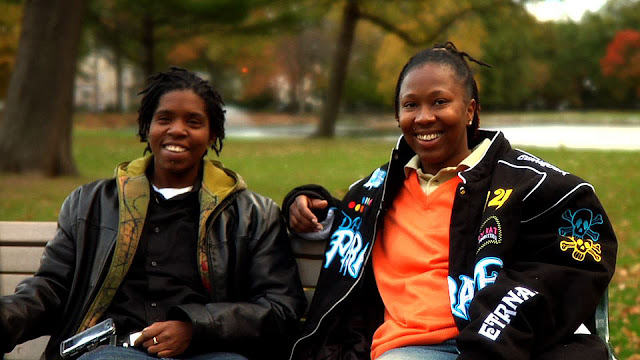 I watched "Out in the Night" over a month ago and it still haunts me. This documentary kicks off POV’s 28th Season on PBS.

In our current environment of #BlackLivesMatter, Charleston and countless Black men, women and children being killed by the police, this documentary is poignant and timely. As the summary above states, one night a group of friends, all black lesbians, were out on the town. A dude walks up to them and starts harassing them violently. They fight back. Most of the incident is caught on camera, but it is not enough to save them from prosecution. The majority of the film is about the impact of not just the injustice of the incarceration of four of the women, but the impact of incarceration on their family's lives.

I won't kid you, it is a difficult movie to watch. For those of you who work in the prison abolitionist movement, few things may shock you. But for those who still believe that incarceration is the best way to punish people, your socks will be knocked off.

The strength of the women who were incarcerated is intense. It is not often that I am left speechless to describe a film. All I can say is that you must watch this film. Check your local listings to see when you can catch this moving film.
Labels: LGBT movies reviews