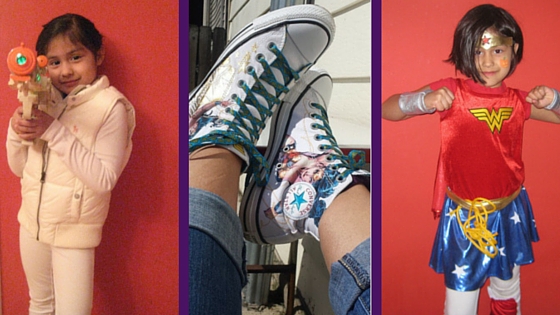 The sexualized depiction of female superheroes has always been a point of contention about anointing Wonder Woman or Xena as feminist icons. The male-gazed bodies out weigh the feminist messages for some. As one friend’s daughter asked, “How can Wonder Woman save people in her underwear?” A meme that continues to pop up in my Facebook feed has Wonder Woman announcing that if she doesn’t get pants, no one gets pants. 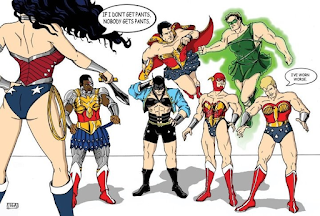 So when I found out that Mattel was being tasked with creating the action figures for DC’s Super Hero Girls project, I was skeptical. How could the company that brought us “I hate math” Barbie (No, I’ll never let them forget that one!) create anything but a Batgirl who looks more in need of a sandwich than one who can bust down a door? Well one quick trip to Mattel HQ and I was proven wrong.

As a disclaimer upfront, I was a gender and body image expert brought into review the line and offer my point of view. I was paid for my time including travel and hotel. I did NOT leave Mattel HQ with a suitcase of swag. 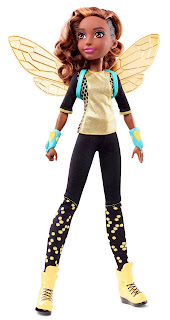 It was a full day meeting with reps from Mattel, DC and others involved in the launch of this new universe. I heard of their market research including that they found no gender difference in superhero worship. Girls like ‘em as much as boys do. Surprise! Surprise! Not. There were differences though and the one I was struck by was how kids want the superhero to save the day. Boys are much more likely to want the bad guy to die or be locked up, while girls want the superhero to talk some sense in the villain and convert them into a hero. With me at the table were, as Bloomberg put it, "half a dozen of [Mattel's] biggest critics: a collection of feminists, bloggers, and academics." I really expected to go into that room and spend all day lecturing on gender, body image and put my two Gender & Women's Studies degrees to more use in 6 hours than in the last 20 years.

Instead I was blown away by most of what I heard and saw. While I did critique some of their research - pointing out that girls are just as guilty as aggression as boys, but they don't hit as often - and the toy mock ups, overall I liked what I saw.

The first thing we got a sneak peek of was the cartoon series. The show's premise is that the DC superheroes are now all teens and in high school together. Wonder Woman does not show up right away. Rather Bumblebee and Harley Quinn are the superheroes already at the school. The cartoon's intro is embedded below. I know, I know, locating all the superheroes, except Batman, in high school is not canon, but hell, after the new 52, what is canon anymore! It's a cartoon and it looks fun. "DC has major plans to put Super Hero Girls everywhere kids are. It will have dedicated Twitter, Facebook and Instagram accounts, there are plans for TV specials and direct-to-video projects, plus girls will be able to read the characters’ continuing adventures in a Random House middle-grade novel series and in DC graphic novels."

Next we saw the toys. I was really nervous because I could see all the early concept drawings and I was in a room full of Monster High dolls. Would I be able to remember all the things I was sure would be wrong with these dolls? Then the reveal. 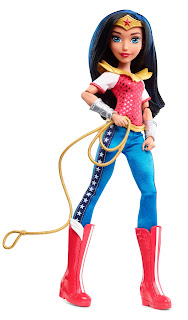 I think the last time I examined something so closely was when I made sure that second pink line was an actual line. The action figures stand on their own. Christine Kim, the lead designer, said she made sure that the dolls could stand on their own. After a false start on the dolls, she told her team to use photos of athletes and dancers as models. This is why these dolls have muscle tone. Sure the legs are longer than this short lady would want, but I was told it's about the fact the dolls have a lot of joints so they can be posed in many different positions. And the photos here are of the smaller actions figures, there will be larger dolls that are even better in terms of body size.

This line should blow up in popularity. Those of us who grew up on Linda Carter's Wonder Woman will want this doll. And we will buy another for the young people in our lives. As the Mary Sue points out, this is an entire line of superheroes created just for girls. But as we stressed in the meeting, it should be a line for both girls and boys. There are boys at the high school and the action figures are large enough to fit with other action figure lines. Marketing this line as gender neutral as possible was one of our big pleas. Alas while Target has removed gendered aisles, that's just one store. Will boys be brave enough to walk over to the girls' aisle in Wal-Mart to grab a Batgirl?

Hopefully they will. I want to go back to the research finding about how boys expect the villains to

die or be jailed while the girls expect the hero to help turn the villain around. We saw a clip from the cartoon where Harley Quinn is so excited to have Wonder Woman as a roomie that Wonder Woman is annoyed to death. We've all been there right? We pull back and the annoying friend walks away. I've also been that annoying friend and it feels terrible. Wonder Woman realizes that Harley is just excited and goes over to hang out with her. It was a sweet moment. And while not all depictions of superheroes shows the villain getting killed, they rarely turn the villain into a superhero. Maybe, just maybe this cartoon will give boys an image that not all "bad guys" are bad, but are people who do bad things. I know, it's a lot to expect from a cartoon and a plastic doll.

But wait, that's not all. We will not only be getting cartoons and action figures, but we are getting accessories! Yup, one of the accessories we are getting is a Wonder Woman shield that shoots out little discs. Oh, my dear readers, it took the threat of sure arrest that I did not walk out of that room with my own Wonder Woman shield. I seriously teared up when I held it. It is exactly the type of toy I would have begged my parents for when I was a kid. It shall be the only thing on my wish list until it is mine. Oh, hell, who am I kidding? I'm gonna be at Target the day they hit the shelves.

This universe is not perfect. In fact what we saw were mock ups. Things can and will most likely change before we can get our hands on them. The show will run and something offensive will be in it. Mattel and/or DC will screw something up. But I did not go into that room looking for perfection. What I found were a lot of people who appeared to want to do the right thing. Change is incremental and I saw a lot of incremental changes and then some. Muscles on a doll is a world away from the unrealistic Barbie and Monster High dolls. Girls and boys will play with these toys, watch the cartoons and, hopefully, color in the coloring books with a more realistic view of what bodies look like.

As the header on this post shows, my family is a family that does superheroes. We go to the movies, wear the costumes and watch the shows. I love superheroes which is why I have been such a critic of how they not only depict women, but been so pissed when women superheroes vanish when it comes to merchandise. In my Bitch piece about Wonder Woman I express fear of what that movie will look like. I do not trust Hollywood to do her justice. But this cartoon and the action figure I held, those should do her justice. That is if someone higher up doesn't screw this up.