Research shows that since 2002, there has been an increase in the number of hotels in Long Beach, CA from 37 to 44 while its workforce has decreased from 2,575 to 2,370, drastically increasing hotel workloads. 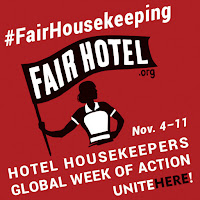 UNITE HERE Local 1 surveyed 18 out of the approximately 29 members of the Hotels Monaco’s housekeeping department in June and July 2015, including 14 women who identified as housekeepers. All workers who responded reported experiencing pain at work (responding affirmatively to the question “do you ever experience pain at work?”) 78% of respondents reported taking pain relievers, citing examples such as Tylenol or Advil. 72% reported having woken up during the night in pain. [link] Actions have taken place at Hotel Monaco in the past and earlier today there was more action. 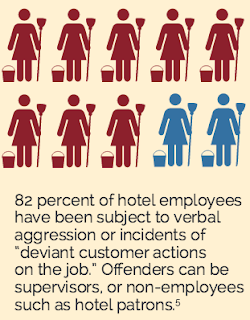 In an effort to address these issues, community and clergy will accompany Long Beach hotel workers in a program and candlelight march celebrating Housekeeper’s Global Week of Action in which hotel housekeepers across the U.S. and Canada, will be holding protests in 13 cities across North America spotlighting safety concerns and poor wages faced by many women who clean hotel rooms. This action is being held in conjunction with protests organized by housekeepers in more than 30 nations worldwide this week in a call for fairer treatment of hotel housekeepers across the global hotel industry.

If you are in the Long Beach area, please join in on Thursday, November 12th – 5:00 PM at the Long Beach Renaissance Hotel Promenade -- 111 East Ocean Blvd., Long Beach.

Citations from A New Economy for All