Marching on Black Friday for #LaquanMcDonald

I hiked over to the Mag Mile to be at the start of the Laquan McDonald march. This first photo is from the start of the march at Michigan and the Chicago River. I got there a bit late and the first thing I saw was a white man being arrested. There were conflicting stories or views of what happened. Some people I ran into said it was an act of civil disobedience. A friend I ran into said it looked like a deliberate act to cause trouble. What I can say is that act and some disagreement between individual groups may be why the march ended up split into two sections. 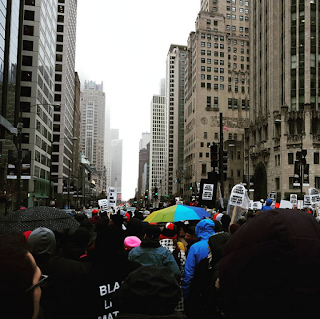 Here is a better shot of the march filling up Michigan Avenue and heading north from the river.

Often in organizing there is a scrum to get to the head of the press release, march or podium. It is important to the issue who is framed by the media and thus seen by the public as the face of the issue. I heard from chatter that this scrum had occurred between competing organizing groups. There were a few moments in the march where different groups created a line of their supporters to span Michigan avenue. As I walked, I saw three of them. But this moment where young Black people, most like none older than 12, stood arm in arm across Michigan Avenue. 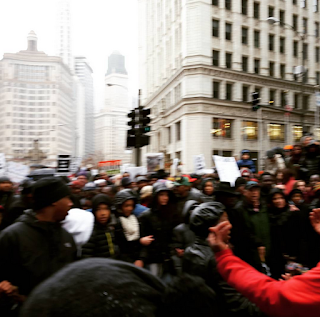 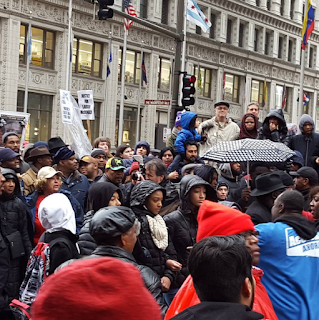 This is a shot of the march behind me after I caught up with the front part of the march. At the top of the march, the police tried to keep the march from spanning the entire width of Michigan avenue, but soon enough we took up the whole space. 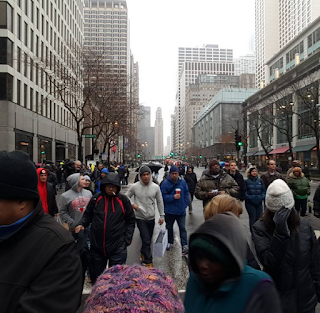 Finally made it to Water Tower. Here is where I noticed the police were using their bicycles to create a fence to keep the demonstrators in the street and shoppers out. I was able to slip through a hole and into Water Tower where I was picking up my daughter. 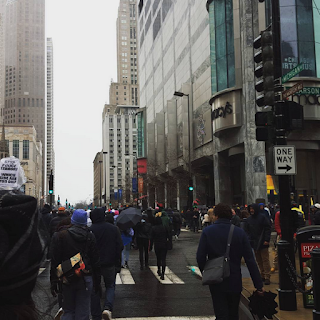 Once inside Water Tower security locked the doors. I noticed it happening and tried to get out, but I was too slow. Instead we were told to go back up the second floor and exit out the back entrance. Some shoppers were clearly panicked about this situation. It was more like mass claustrophobia set in. After finding my daughter, we left Water Tower and headed out to our long-planned volunteer hour at a neighborhood organization.

It was great to run into friends, especially friends made on the Chuy campaign. It was good to spend some time supporting my Black neighbors, especially BYP100. Sharing these photos and my observances is also in support.

I want to add that while we should be thankful that the demonstrations have been peaceful, we should ask ourselves why we would have expected it otherwise? I know Baltimore and Ferguson burned and Chicago has its own history of burning in outrage, but perhaps this peaceful and thoughtful reaction to the video can help us alter our expectations of how communities act. It will be interesting to see how others who have been organizing in the community can say about why Chicago did not burn or why the others did. Something different happened and it was not just because the mayor told us to behave.
Labels: chicago NaBloPoMo