This weekend has been the National Women's Studies Association conference in Milwaukee. I presented a paper on the use of femininity to attract girls and young women to STEM (science, technology, engineering and mathematics). It's a paper that I have been mulling for a few years and the conference's theme of "precarity" gave me the push I needed to finally work on it. Luckily I also had a summer intern who not only read some of the journal articles I cite, but we were able to sit down and discuss them. My office is pretty small, so when I can have a coworker that I can bounce ideas, discuss papers and even flesh out paper directions with I really enjoy it. The paper is not complete, but the feedback I received today will propel me to finish it and try to get it published.

This is hands down my favorite conference to attend. It's a feminist nerd fest. And this weekend has not disappointed. Some highlights:
Most importantly for me, I got to spend some time with my NWSA friends that I usually only see once a year.

Next year we hit Canada! Montreal here we come! 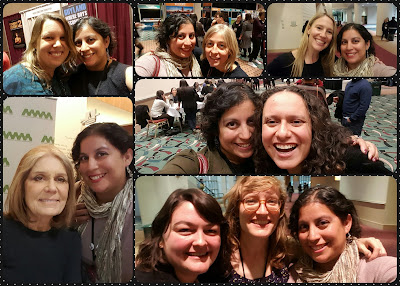