No Más Bebés tells the story of a little-known but landmark event in reproductive justice, when a small group of Mexican immigrant women sued county doctors, the state, and the U.S. government after they were sterilized while giving birth at Los Angeles County-USC Medical Center during the late 1960s and early 1970s. 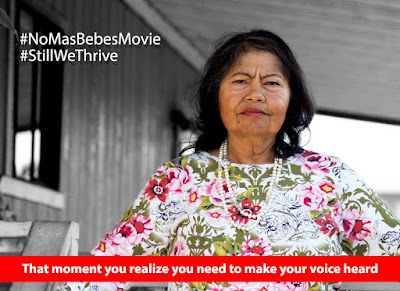 This moving (seriously, have tissues at hand!) documentary about the human rights abuses inflicted on Latinas in the 1960s and 1970s will have you up in arms. My friend and colleague, Elena R. Gutiérrez did a lot of the research work to help put together this puzzle. In a blog post about the film she says:


“No Más Bebés” also shows that socially grounded attitudes relating to ethnicity and gender can play a role in the provision of reproductive health care services; a message that is important for us to hear today. In my own research I show that the abusive practices that occurred at LACMC were not only shaped by debates on population control, but also by concerns about increased immigration from Mexico and the stereotype that Mexican women gave birth to too many children. Through tracing newspaper articles, organizational records and scholarly research in Fertile Matters: The Politics of Mexican-origin Women’s Reproduction, I show how these “stereotypes” about Mexican immigrant women being hyper-fertile and “having too many children” are deeply-rooted beliefs that are part and parcel of institutionalized racism and were perpetuated by the media, social science, and immigration control activists throughout the 20th century carrying into the 21st century. Beyond representations of the perpetually “pregnant pilgrim” who came to the United States purposefully to have children born on US soil so that that they could become American citizens (an idea perpetuated in both Mexican news media and popular culture), “hyperfertility” as a social construct became significantly entrenched in academia, and has thus gained legitimacy in both scholarly research and policy response. I argue that this context and the general public perception that Latina women are significantly more “fertile” than women of other races and ethnicities influenced medical practitioners’ behaviors.

Elena R. Gutierrez is an Associate Professor of Gender and Women’s Studies and Latin American and Latino Studies at the University of Illinois, Chicago. She is also co-author of Undivided Rights: Women of Color Organizing for Reproductive Justice, which will be reprinted by Haymarket Press in April and director of the Reproductive Justice Virtual Library.


This is an important film to view and discuss. I do not want you to just watch it, think and stop there. No. This film calls for action. It demands it. I saw a sneak preview of No Mas Bebes about a year ago and was floored. And I know much of the history already. What makes this such a powerful film is that you hear from the women who were robbed of future children. They were robbed of that decision to even have future children. You hear from their families. It is just, gah...

At the moment we are in the midst of the 2016 Presidential campaign. We have candidates who are railing against anchor babies, wanting to use religious tests on refugees and then those who are calling for the end of the Hyde Amendment in order to increase women's access to reproductive services. All of these moments are connected because the government wants to say who is welcome not just in the USA, but who is welcome to reproduce and parent. Too often the feminist movement is seen as just about abortion, but an intersectional feminist movement is concerned about parenting as well.

On top of this political conversation is the recent worry over the Zika virus. A health issue that is worth of concern over who is getting pregnant, the governments that are calling for women to hold off on getting pregnant and failing to give them access to the tools (birth control and abortion) to make the best decisions for themselves and their families.

This film premieres on February 1st on your loca PBS station. Watch it, tweet it, share it, discuss it. It's that important and not just to Latinas around the world.