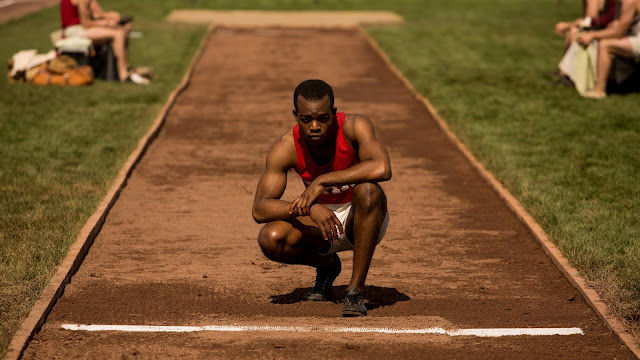 EDITED 2.23.2016:
There was something about the film that kept poking at me over the weekend. It took a lot of stewing in my head and reading of other reviews to realize what it was. We rarely hear from Jesse himself. We get a lot of scenes where Jesse is the center of conflict, but other people in the movie resolve it or explaining it. This movie is still beautifully shot and can be the start of a larger conversation. My daughter and I had a good chat about whether or not the Olympics should had been held at all. We also talked about the choices that athletes need to make sometimes, about their social responsibility. I think it was having these conversations that I realized I did not really know what Jesse was thinking, outside of a few dramatic scenes. This leads me to be very conflicted about the film.

I took Ella to see Race tonight. I won a pair of passes to the Chicago sneak preview and thankfully she did not have a lot of homework. Now while I am a sports fan and I knew Jesse Owens, I did not know details of his story. Sure, I knew that he went to the Berlin Olympics and kicked Nazi butt, but that was about it. I saw that to say I have no deep historical record to compare this beautiful film to.

Owens was the world's fastest man during a time when most of the world would rather not acknowledge the existence, much less the accomplishments of a Black man. The movie picks up a few years before World War II, meaning that the US is still stuck in the Great Depression. Owens' father has been out of work for a long time and that clearly weighs on both of them. When we meet Jesse he is on his way to Ohio State University to start his college career. At one point his brother makes a comment about him being a college boy - but not in a supportive way either. Ugh...

There is so much conflict in this film that it made my heart hurt. Owens is torn about leaving his family, including his girlfriend and toddler daughter at home while he heads off to college. Racism runs amok on the OSU campus including the locker room the integrated track team shares with the apparently all-white football team. Of course then we have the build up to the Berlin Olympics. Should the US boycott or not? The politics of this decision seems to be fairly well depicted, including the pressure that Owens later receives from the NAACP to not compete. There is an obligatory "there are no politics in sports!" moment that is there to make it clear that sports is all about politics.

Overall I enjoyed the film. As a politically minded sports fan, I always love a movie that does a good job at depicting especially hot political moments.