The world of girls magazines is a scary place. Walk up to the magazine aisle of your fave drugstore and flip through girl-centric magazines...then try to sleep well at night. Recently Girls Life came under fire for exclaiming the secrets of dream hair on their cover while Boys Life was all about planning for a solid career. Someone "fixed it" via Photoshop. 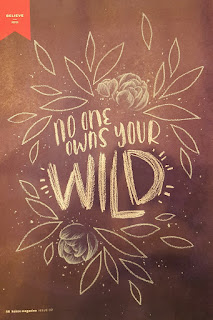 I have a ton of issues with the original Girls Life cover, but have some issues with the "fixed" cover as well. First of all is the shaming of the actress on the original cover. Olivia Holt is yet another young woman trying to have it all through the Disney empire. She sings! She dances! She karate chops! She acts! Having a teenager myself, I have watched plenty of Disney shows. And while there are some things to improve in their narrative, you gotta give props to these teens who are slowly building their own empires...critique of Disney aside cause I'm already on a way tangent. Next, while I love that the "fixed" cover includes a headline on careers, an equally large headline is about girls doing good. When are we going to get away from that narrative people? Maybe label that leadership? And "my first miss" as confidence? Nah...let's call that entrepreneurship 101. Anywho, even when we try to fix problematic things for girls we miss the mark.

That's where Kazoo comes in. It's tagline is "A magazine for girls who aren't afraid to make some noise." YESSSS! Erin Bried is the founder and has oodles of magazine experience behind her. She came up with the idea for Kazoo as she was searching for magazines for her 5-year-old. Now there are plenty of other magazines that I got my daughter at that age, mostly from Cricket Media, as well as New Moon Girls, but I am happy to welcome Kazoo to the land of kid media.

Bried says Kazoo is important because even girls at the age of 5 are being indoctrinated by popular media and culture to conform to gendered expectations that result in:


•Six in ten girls stop doing what they love, because they feel bad about their looks. And by age 11, 30 percent of them have already put themselves on a diet.
•Seventy five percent of girls are interested in engineering and related fields, and yet only 11 percent of practicing engineers are women. 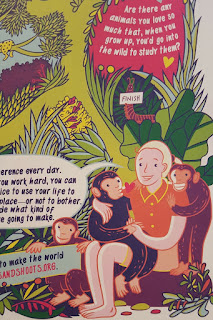 Kazoo has a great feel to it. Bried do NOT go glossy! I think the thick paper feel is perfect, especially since there is a coloring page on the inside cover of issue 2. While the incredibility beautiful feature on Jane Goodall was amazing to read, my favorite article is the how-to on parkour. Seriously how many times have you seen a parent scold a kid, especially a girl, for climbing up where you "shouldn't" climb when walking down the street? I mean, if you didn't want a kid climbing on the ledge of building, don't put in a ledge! haha..Kinda kidding, but I was totally that kid who could find every nook to climb up and walk on. The world was my balance beam.

In addition to great content, most of the magazine is illustrated. And the diversity of illustrated girls is what we should expect from any media outlet in 2016.

So what if your girl isn't into the outdoors or climbing on stuff? Does she like puzzles? Kazoo has that. Does she like cooking? Got that too. Issue 2 has so much info on photography you might think the magazine is about photography! 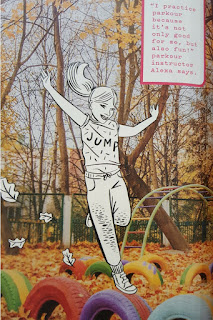 Kazoo is sweet and fierce. It sends all the empowering signals we think we need to send our girls without using most of the jargon. A great example is the parkour article. Not only are there how-tos, but the how-tos come from Alexa Marcigliano, professional stuntwoman. Not once were the safety issues that impact stuntwomen brought up in a sidebar or infographic. While the issues are important, clobbering girls over the head with a negative framing can backfire as I know from working in women in STEM for almost 20 years.

Disclaimer: I was sent a review copy of the magazine.
Labels: feminism girls magazine parenting reviews