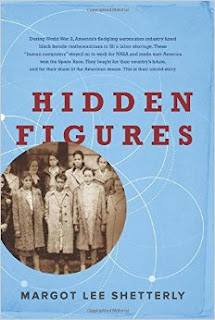 I am a nerd in many different ways. I love math. I went to Space Camp for my 40th birthday. I could go on, but I think I have established my nerd credentials. Thus when I heard this book came out and a movie, I could not wait! I picked up this book at Powell's Portland airport store. Let me tell you,  Hidden Figures by Margot Lee Shetterly is a beautifully written book about the collision of race, gender, and science in the USA from World War II to the late 1960s.

Hidden Figures tells the stories of a number of African American women who found themselves working on engineering projects during World War II and through the 1960s space race. Oh, I should add that they were doing all of this in Virginia too.

As someone who has spent her career working to diversify science, technology, engineering and mathematics, these type of stories are not new to me, even if the characters are. There are so many hidden figures in the annals of the history of science we could write books for a generation. No, what is most compelling about Hidden Figures is how effortlessly Shetterly connects the dots between what is occurring in the government labs during the space race and what is happening in our society writ large.


In the prologue, Shetterly sets the stage with the fact that "growing up in Hampton, the face of science was brown like mine." This is so important to the overall story. The author grew up in a community where people of color did science, so no big whoop! Can you imagine the choices her generation were able to conceive because of this fact? Goodness. But as she untangles the threads of the stories, she begins to craft a new vision of where she came from. One where Black women as mathematicians were not only recruited, but due to discrimination a smart business move for the government agency that would become NASA. And yes, despite the professionalism that one would give to a government mathematician, the burden of working hard and long hours to offer one's children a "better life" was just as real for these women as the women who labored in homes and factories.

Time and time again Shetterly balances the progress happening in the research labs with how stuck Virginia and the rest of the country were in terms of race and gender relations.

In relation to African Americans fighting in World War II, she writes:


The system that kept the black race at the bottom of American society was do deeply rooted in the nation's history that it was impervious to the country's ideals of equality.

In relation to using education as a force for social advancement:


The Negro's ladder to the American dream was missing rungs, with even the most outwardly successful blacks worries that at any moment the forces of discrimination would lay waste to their economic security.

Shetterly never lets the readers forget the larger social forces at play, even as our heroes make leaps in mathematical theory. The reality is that they are Black women in the South in the 1940s to 1960s. No amount of heroism allows them to escape that gravitational pull. The desegregation of schools was a huge issue at the time of these women's fantastic accomplishments, but Shetterly writes:


As fantastical as American's space ambitions might have seemed, sending a man into space was starting to feel like a straightforward task compared to putting black and white student together in the same Virginia classrooms.

One especially touching and brilliant example of the two worlds these women were living in was when Mary Jackon's son wins the box car derby.


Mary knew that her son was a ringer; the two of them had been building to win. Brain busters' kids were supposed to come out on top in a race like this, even if the brain buster was a woman, or black, or both.

Shetterly shares many women's stories with us in 265 pages. You may get overwhelmed by the number of stories as well as the emotions that come along. But keep track. Their stories have been hidden so long that Shetterly could have written a whole book on each woman. Maybe she should for children to read along with their biographies of Glenn, Armstrong, and Lindberg. Because these women may never have gone into space or set foot on the moon, but they are no less part of our history of exploration and American exceptionalism.

Buy a copy from Powells or IndieBound. And go see the movie! I can't wait to see it myself.
Labels: books reviews science