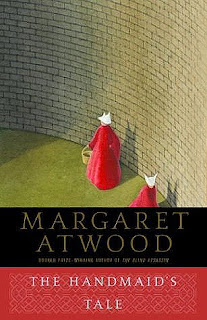 I was invited to participate in Evanston's Writer's Resist event on January 15th and this is an edited version of what I read. I'm still new to the live lit scene, but will occasionally post what I read. Sometimes things are best left at the event.

Margaret Atwood’s The Handmaid’s Tale has been shorthand for the collective backlash to women’s progress, especially in regards to reproductive autonomy for quite some time. Safe to say most know the plot without having had read the book. A tale of a post-democratic former-USA taken over by an ultra conservative Christian theocracy where fertile white women are forced to reproduce for the “worthy” ruling class. A few weeks ago I was struck by the faint memory that the book does not conclude in escape or the reestablishment of democracy, rather it ends with an academic talk pondering the veracity of the story we had just consumed. This fact hit me in the gut as I have been considering how we will document the resistance during the Trump administration.

In the last chapter entitled, “Historical Notes on the Handmaid’s Tale” Atwood reveals where she got inspiration for not just the plot but the costumes and even a brutal public hanging of a handmaid at the hands of fellow handmaids — the group of handmaids pull on the rope that hangs the doomed handmaid up on the stage — immediately afterward they tear a man apart with their bare hands. Atwood often gets asked how she comes up with all the ideas in her books. Her response? She doesn’t. She just looks around the world. Atwood, through the character Professor Pieixoto, reminds us how easy it can be to slide into a state of fear that leads to a theocracy.


As we know from the study of history, no new system cam impose itself upon a previos one without incorporating many of the elements to be found in the latter...Gilead firmly rooted in the pre-Gilead period, and racist fears provided some of the emotional fuel that allowed the Gilead takeover to succeed as well as it did. (page 305)

Gilead was, although undoubtedly patriarchal in form, occasionally matriarchal in content, like some sectors of the social fabric that gave rise to it....the best and most cost-effective way to control women for reproductive and other purposes was through women themselves. For this there were many historical precedents; in fact...in the case of Gilead, there were many women willing to serve as Aunts, either because of a genuine belief in what they called "traditional values," or for the benefits they might thereby acquire. When power is scarce, a little of it is tempting." (page 308)

As I reread those passages it was as if Atwood was responding to the 53% of white women who favored Trump at the polls. The fact that the Clinton campaign embraced the historic nature of a possible win in 2016 versus 2008 gave too many people confidence that women as a whole would act in concert to shatter the glass ceiling of the presidency. Yet even the one book that feminists have waved around as a warning sign for years told us not to expect women to stand in union against totalitarian regimes. Because as Atwood states, they never have.

In the end, after reading these dozen pages over and over I have come to the conclusion that we cannot assume allegiances. We must be better at identifying those of the oppressed who wish to find solace in oppressing others. We need to identify in ourselves when we allow our biases to lead us to condemning a brother or sister out of fear. We must remain vigilant of allowing that fear to push us to serve the incoming administration.

We must document whatever horrors emerge from this administration and hold accomplices accountable. we must write our own history. Especially in the time of Trumpism, facts are opinions unless said by the person you trust. Writers must resist whether it is in our pen & paper diaries, blogs, Instagram feeds or nationally syndicated columns. Just resist.

Postscript...Hulu is running a minseries based on the book this spring and I couldn't not share the trailer here.