Henrietta Lacks Trailer is OUT!!

Oh yeah...The trailer for the HBO movie of The Immortal Life of Henrietta Lacks is out! And if you read the book (if you haven't GO NOW!) you will find it emotional and gut wrenching. 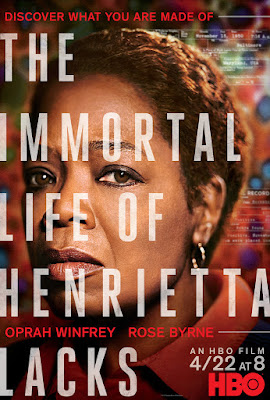 OK, the cop buddy movie vibe I'm getting from Oprah and Rose Byrne is a bit grating, but the rest of the trailer punched me in the gut.

Now that I've sent you to find the book and read it, I must say that the movie is an adaptation. With that, while Skloot does talk about the family in the book, it looks like the movie will be focusing more on how the Lacks family reacts to knowing that their loved one had cells taken from her and a gazillion dollar industry has been built upon that theft while they stand on precarious economic space.

One two-hour movie seems too short to fully address the issues of giving consent to participate in medical research, the industry that makes gobs of money off medical advances (one reason I don't think NIH will be totally cut off - the economy depends on NIH advances), and the racism that continues to impact POC's access to healthcare today. The book was so powerful on so many levels. I hope the movie does the same so that Lacks' story is known to even more people.

The Immortal Life of Henrietta Lacks
debuts on HBO on Saturday, April 22.


Oprah Winfrey and Rose Byrne star in this adaptation of Rebecca Skloot’s critically acclaimed, bestselling nonfiction book of the same name. The film tells the story of Henrietta Lacks, an African-American woman whose cells were used to create the first immortal human cell line. Told through the eyes of her daughter, Deborah Lacks (Winfrey), the film chronicles her search, with the help of journalist Rebecca Skloot (Byrne), to learn about the mother she never knew and understand how the unauthorized harvesting of Lacks’ cancerous cells in 1951 led to unprecedented medical breakthroughs, changing countless lives and the face of medicine forever. George C. Wolfe directs from his screenplay; Oprah Winfrey, Alan Ball, Peter Macdissi, Carla Gardini and Lydia Dean Pilcher executive produce. A Your Face Goes Here Entertainment, Harpo Films and Cine Mosaic production.
Labels: books movies