100 Days after the Women's March

While everyone is obsessed with how much damage the Fake Tanned One has done in 100 days, I'm more interested in what WE have done in the 100 days since the Women's March.

Let's recall that 250,000 women, men, and children descended on Grant Park on one of the most beautiful days Chicago has seen in January. This so exceeded expectations that the march part of the March was officially cancelled, but you know when you have a quarter million people show up somewhere and they move, it's kinda a march.

I've been to a lot of marches and few compare to the optimism this one had. I know it was too happy for a protest and all the marches had issues, but the turn out was a great way to kick off four years of resistance. And the diversity of those in attendance made me hopeful that no matter how bad things would be getting, we would fight every fight and maybe even win a few. 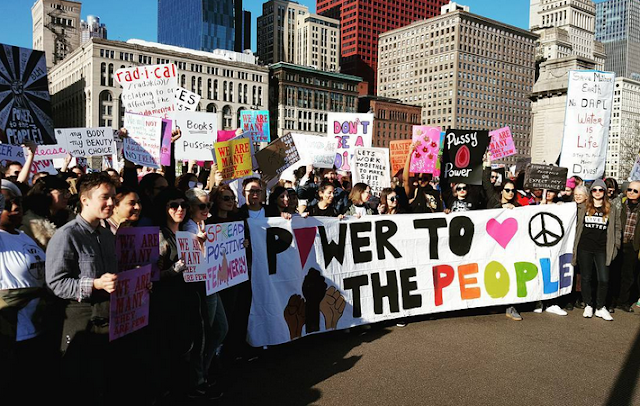 I think in 100 days feminists have put on quite a resistance.

I truly believe that the March and the turnout at the March helped people who normally don't get engaged in politics empower themselves to act. How?
I try to keep these things in mind as we pass our 100 days mark. As we get deeper into the long four years of the current administration, as we anxiously await the next episode of "The Handmaid's Tale" (OMG, so creepy and gooood!), and as we hear the drum beats of war come out of the mouths of our so-called leaders...see, I got myself depressed right there. But we are strong, we will not win every fight, but gawd damnit, I know we will win this war. It is said that the arc of the moral universe is long, but it bends toward justice...and we will bend it with the weight of our fight.


What is keeping you resisting and persisting?

This post is made possible by support from Planned Parenthood Action Fund.
All opinions are my own.