I get a lot of requests to share crowdsourced projects, but this is one of the best ones...a children's book that addresses the way Trump treats people. 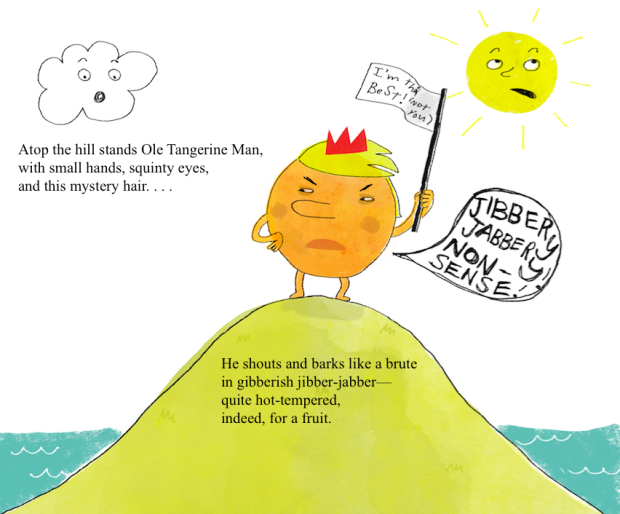 After watching the pitch video I was intrigued...So instead of sending off money, I sent off some questions for Carol Steuri, the author, behind what could be a popular children's book. Steuri is not a US citizen and says that the aim of the book is to empower kids to stand up against bullies and protect one another. Once costs are covered, all remaining funds (roughly 20%) will be donated to a nonprofit that inspires women and girls to run for elected office in the U.S.

1) You're not a US citizen, so why are you invested in our story?

Steuri: The U.S has such a huge impact across the globe, it's hard not to be invested. As a Canadian, I don't want to see harm done to my neighbours. As a Canadian living abroad in Europe, I see how U.S politics affects us here with far-right candidates gaining momentum and spewing the same sort of rhetoric. It feels like very uncertain times at the moment and it scares the hell out of me. In my opinion, it doesn’t matter where you live, what nation you call home, what’s happening at moment isn’t right and if you have a voice, use it.

2) Do you have a personal story of being bullied that you leaned on as you wrote? No need for identifying details!

Steuri: I think most people have experienced some form of bullying in their life. There's no one story that helped craft the book other than Ole Tangerine Man himself. However, I wanted to ensure empathy was laced in throughout the story. This book identifies all sorts of bullying behavior, but also attempts to explain what might be going on inside Ole Tangerine Man, as a way to make sense of his antics.

My editor has a Masters in Early Childhood Education and I leaned on her and other teacher friends for their guidance and feedback to ensure the bullying messages were all on point.

3) Some people don't like to see politics in children's books. What do you say to people who might be offended by your book as being too political?

Steuri: Most parents I know are struggling with how best to discuss the current political climate with their kids. This is a conversation starter for just that. I think the elephant in the room needs to be called out because there’s no hiding from it. For those that might be offended, I would encourage them to read the story. It’s not an anti-Ole Tangerine Man attack on him or his followers, it’s a rallying cry to bring all fruits together.

For a very young child though, it’s simply a funny, whimsical little book that empowers them to stand up against bullies and protect one another. The story and illustrations are very playful with lots of rich imagery and the metaphors/puns are only for the adult reader. It was cathartic for me to write and helped me process Ole Tangerine Man's behaviour myself. And from what others have told me, it's quite satisfying and inspiring to read because I think we all need this message right now.

4) Why is it important to you to support women running for elected offices? Is that a message in your book? Perhaps a message for your next children's book?

The book ends with a brave, young blueberry girl challenging Ole Tangerine Man for his crown, as the future Miss Captain AMAZING. So there's that link.

I looked to many different types of organizations who are making it their mandate to stand up against this bully, which is so very important. But I chose to support an organization inspiring women and girls to consider a future run in politics because it felt like a positive, future-oriented approach.