I can't believe I still have to blog about Planned Parenthood

Like a lot of people I turned to Planned Parenthood during college.

Those were the days when Planned Parenthood sold birth control pills that fell under some weird rules that ended in the Dubya era so a pack of pills was maybe $10, maybe a bit less if I bought more than one at a time. But most of the time I bought a pack each month, having to hike over to the clinic off campus and say hi to the staff. Which might be why I love Planned Parenthood so much and ended up volunteering with them soon after college.

Ah, the good old days of the late 1990s when passing out free condoms seemed to be the height of being a radical.

That's how I spent one summer...passing out free condoms at street fairs in Chicago. But of course that was just to get people to the table. To get them talking. Once we lured people in with the free condom we would register people to vote, talk to them about how even with a Democrat in the White House, reproductive rights were being threatened. It was just a few years after the Illinois General Assembly passed a parental notification law, but was soon blocked from being active until just a few years ago. We also had issues with the rise of abstinence-only sex education, not to mention the so-called late term abortion bills of the 1990s. So yeah, handing out condoms to fellow Chicagoans was a crash course in WTF is going wrong in reproductive rights.

I also spent a year volunteering at the clinic that provided abortion services. While I did not work on the days the services were preformed, I did interact with many of the women who came in for post-care. I saw first hand the fear they had until they were assured that yes, you are no longer pregnant. I also interacted with young people seeking care and guidance with STIs, HIV, abnormal pap smears, and general not-feeling-wellness.

I stand with Planned Parenthood not just because they got me through college, but because of the work they did to help all those people I checked into the clinic get through life. And continue to get people through life. While I know that unplanned pregnancies do not have to ruin a life, I knew that I was not ready to become a mother in college. Thankfully Planned Parenthood was there for me when I needed them.


Now we're living in a moment where not just the President flip-flops on his views around reproductive rights, but I live in Illinois where our Governor is a huge donor to Planned Parenthood, but says will veto a bill protecting abortion access.

And the GOP is getting itchy about Trumpcare. They want a vote soon in order to kill it and move on to tax reform. But we have to MAKE SURE Trumpcare is dead. We can't rely on the GOP to mess it up.

There are FOUR ways to protect Planned Parenthood: 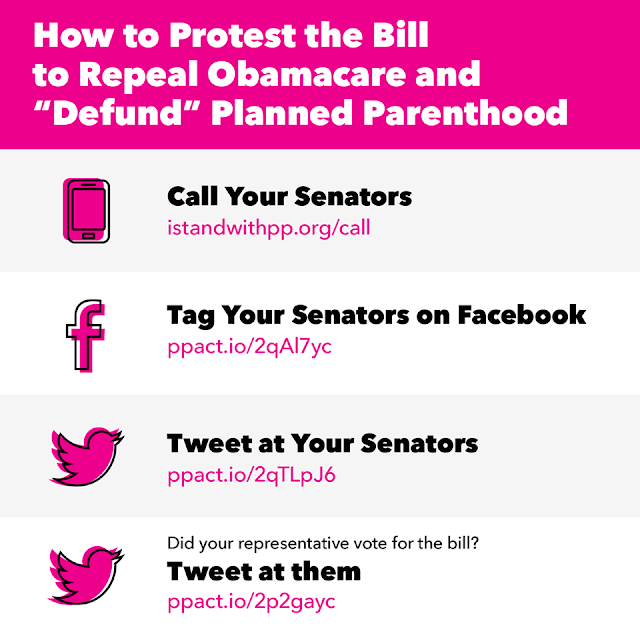 Ready? Then let's do this!!


This post is made possible with support from the Mission List. All opinions are my own.
Labels: abortion feminism health sponsoredpost