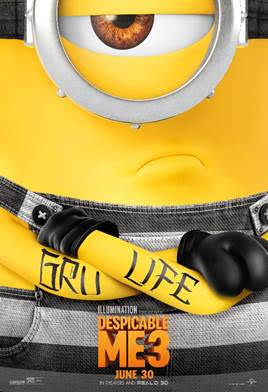 Thanks to an invite from the publicity team, I took my 13-year-old daughter and her friend to a special screening of Despicable Me 3. We really loved the first movie. My daughter was Agnes for Halloween that year. The second movie fell flat for the overly racist stereotype of El Macho. I STILL SEE YOU, BENJAMIN BRATT!

The theater was packed with families, many in Minion t-shirts, and kids who did not any of the sugar they were about to ingest from the concession stand. Since it was a special screening the organizers kept trying to get our attention for giveaways and rule announcements. Nope. The kids were too excited to shush for a free t-shirt.

So the movie... This movie was better than DM2, but still far from the magic that made Despicable Me the franchise we keep going back to. As I said, I took my teenage daughter and while she liked it, it was clear it wasn't a home run. It was a hit with the younger kids we were surrounded by. They laughed, giggled, and danced in their seats.

THINGS I LIKED
THINGS THAT BUGGED ME
So go see the movie. It's not terrible, but it's a good decision on a hot steamy summer day. And it's a great decision for smaller kids who giggle at fart jokes.

Disclaimer: We bought our own snacks from the concession stand!