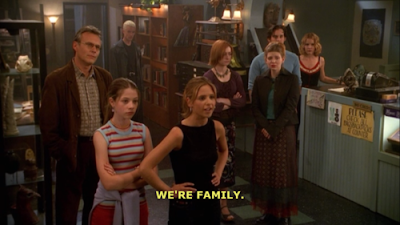 He left evidence along the way like pieces of bread crumbs. Angel's curse, that Wonder Woman script, and Black Widow as a Hulk pacifier. I saw it. I acknowledged it, but I still saw Joss Whedon as a feminist. "My feminism is not perfect. No one's is!" I would cry. But over the weekend I cried for yet another loss in the battle for men to be included in feminism.

Buffy arrived in my life at the tail end of my college years. She took the baton from Xena to fulfill my need for feminist television. As a pop culture junkie I was desperate to watch something that not just validated my world view but also most importantly did not make me feel bad for being overweight, for liking to hang out in a library, and yes even just wanting to have fun despite the weight of the world on my shoulders. The series finale will always be the best finale ever. It depicted what I feel is the true spirit of feminism - that we are in this together. That together we kick the patriarchy's ass and ride off into the sunset. There is no hero to wait for, we are that hero.


When word came on Monday that Whedonesque closed down my heart shattered and yet it is fitting. If Joss built a universe that collected feminist pop culture junkies like Giles rounded up Slayers, then it is perfect that we read Kai Cole's statement and realized we had to break up with Joss. We looked into his eyes and knew we had to stab him with the weapon he forged. 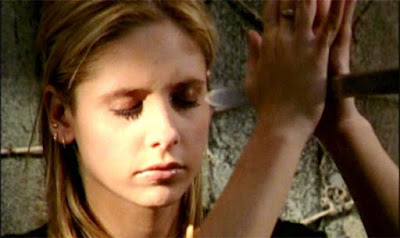 Buffy will always stand as the most important show in my life. I will continue to egg my 14-year-old daughter to watch it. At 25 I thought Xander was adorable, even if a jerk. At 42 I see more jerk than adorable, but I also see how fragile men can be in our world of toxic masculinity. I see his sarcasm as his mask, his superpower. I see how the weight of Buffy's burden was too much, even for a superhuman, and how she had to delegate. She had to learn to lean on her friends. How long did it take each of us to learn those lessons ourselves?

Joss being a terrible husband is not what broke my heart. We never spent this much time on Brad Pitt or any other horrible husband. Instead we wore Team Angie and Team Jen tees. It is what Joss has done to the feminist community itself that broke me.

I am a feminist who eagerly wants men to identify in the struggle. When a friend found out she was having a boy she turned to me and said, "How did this feminist body do that?" I told her that means she was charged with raising a feminist boy who would be a feminist man. I know many feminists doing exactly that. They do this in simple ways such as validating their sons when they are hurt, physically or emotionally. Feminist moms make their sons do women's work around the house. Feminist moms do work that is normally men's work.They live feminist lives so their sons know the new rules and hopefully reject society's norms.

Yet here we go again. Another high profile man who claimed to be a feminist turned out to be a fraud. Maybe Joss was a feminist once upon a time, but quickly realized that his feminist card opened bedroom doors too and he was hooked. I do not know and honestly I do not care how he lost his way. See, there I go again, holding on to the fact that he truly is his mother's son and did believe in feminism.

Joss embodied what feminists had been and continues to demand from Hollywood - that men start carrying the weight of feminist work. And he fucked that up. When the next screenwriter pens the brilliant film what will we do for him? Will we ignore it thinking he's just another Joss? Will we watch the film, but keep a safe distance from its creator?

For many, Joss was never a feminist. His flaws were too great to look past and I respect that. But I feel terrible for everyone who has built a very feminist career upon Joss' pile of lies. Whedonesque, where I posted a bit in the early days. The Whedon Studies Association, which I had one my bucket list to write for and present at a conference. And my current fave Joss-related item, Buffering the Vampire Slayer, where they do a fair amount of Joss critiquing already.

I've written about Buffy over the years. Being a Buffy fan is part of who I am and how people view me. Within hours of the Kai statement a dear friend text me as he was beside himself. I ordered cocktail after cocktail as he caught me at a bar on eclipse eve. We were debating Joss, feminism, and if men should ever call themselves feminists. My friend is fantastic. He's married to a kick ass feminist and they are raising a girl who will surely grow up to be a kick ass feminist. I dislike the term feminist ally. For me, you're either with us or not. Maybe as my friend suggests men get to do feminist things, but should stay away from the label. I dunno. This is why I'm writing this. I'm trying to figure it all out with you.

I'm concerned because this relates to the growing issue of men using feminism as currency.

Not only in how men identify, but the growing movement to include men in all conversations about feminism. On one hand, I totally get it. We need men to push the agenda forward. On the other hand, we have Joss & scores of other dudes who pay the dues, but don't read the back of their membership cards.

I know that there are people waiting to see if I renounce my Buffy fandom and stop quoting the show now that Joss is fully revealed. You too might have that person in your life salivating at watching you squirm and ready to remind you of your Cosby, Woody Allen, and Casey Affleck boycotts. They are probably the same people who ask you to outline in detail why you go to Target, but won't set foot in a Wal-Mart. Well ignore them. If you are like me, Joss and the universe he created means so much to you that you need time to mourn the myth.

If you cry at the end of "Chosen" and "The Body" is the only piece of pop culture that brings you solace after your mom's death, I get ya. He made that for us. His art is still beautiful, even with the gigantic hole he blasted through it. But I am filling for custody.

But the hole he shot through the idea of feminist men is the hole I'm most worried about. Where is the line between men who support feminism, do the work, but stay back versus men who support the work but don't show up? Is it as simple as asking them to step back and girls to the front?

I don't have the answers. If I did, I might have a book deal. Well I'd also need time to write too. But I'm just saying that this is why this is a post on my blog. No need conclusion. No list of recommendations. Other than, men...dudes! Do better.
Labels: feminism men TV