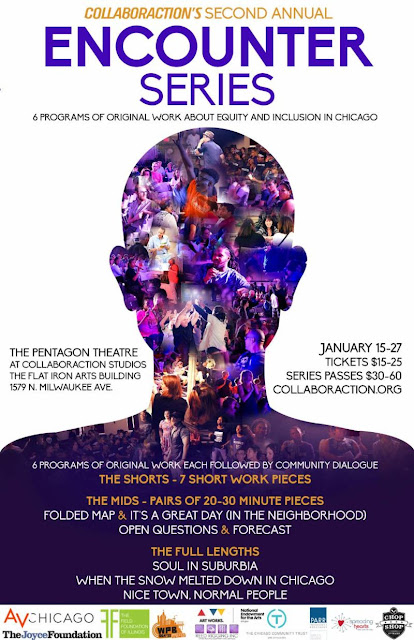 There have been countless attempts to bridge this divide. One of the most recent and ingenious is the Folded Map project. Simply put, who lives at 6400 North and 6400 South and how are their lives different or similar.

Now comes a stage production of the project brought to us by Collaboraction. This production is part of a larger "Encounter" series that runs through January 27th. There are in fact only 2 more times to see this particular piece: Wednesday, January 23 at 7:30 p.m.; Saturday, January 26at 7 p.m.

The piece was moving, but also left me wanting more. Much more. "Folded Map" is far more an origin story of Tonika Johnson and the project itself. I really wanted to hear more about what Johnson had learned from the conversations and if those on the Northside had made changes in the way they go about their lives.

In one sense it is easy to fold the map of Chicago from Englewood, the most dangerous neighborhood if all you know of it is from the evening news, to Rogers Park, home to aging hippies and the heart of Chicago's progressive community. It should make it easier for the project, especially the stage production to ask those with more money, influence, and privilege what they will do to ease the differences we see through the project. Because it left the "what next" conversation centered on sharing ones love of gardening I felt unfulfilled.

That is not to say that the origin story is itself a bad story. In fact it is a fascinating story of one woman's family that started in Englewood, moved to Uptown, then back. It is a case study is why it is worth the two-hour commute for some students in order to have a high school experience that prepares you to be a UN ambassador. It is heartwarming, touching, and extols the power to art to not only be a medium for storytelling, but as community building.

In the end, I strongly encourage you to see the remaining two shows. I hope that Johnson and the rest of the crew continue to evolve this piece that can help cut through the divides, both physical and mental, that keep us apart and Chicago from being the city it can be It has a companion piece, A Great Day (in the Neighborhood), which is a fantastical romp through a creative mind.

Disclaimer: I saw "Folded Map" through a press pass. All opinions are my own.
Labels: chicago reviews