The Feminist Agenda: Season Two Episode 1 "Gloria Feldt on Intentioning the Road Ahead" 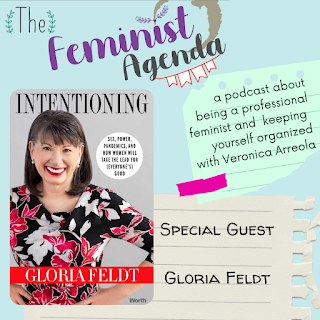 Gloria Feldt joins The Feminist Agenda to discuss her latest book, Intentioning: Sex, Power, Pandemics, and How Women Will Take The Lead for (Everyone's) Good. Gloria is a New York Times best-selling author, speaker, commentator and feminist leader who has gained national recognition as a social and political advocate of women's rights. In 2013, she co-founded Take The Lead, a nonprofit initiative with a goal to propel women to leadership parity by 2025. She is a former CEO and president of Planned Parenthood Federation of America, directing the organization from 1996 to 2005. She has been featured in The New York Times, The Washington Post, Forbes, Time, NBC, Fast Company, Vanity Fair, and much more.
Ways to support The Feminist Agenda podcast:
Follow The Feminist Agenda on Twitter 🟣 Instagram 🟣 Facebook
The Feminist Agenda art is by Valency Muldoon.
Labels: books feminism podcast work