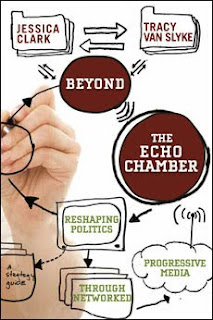 How did the internet go from the dancing hamster to being a pivotal tool in the 2008 Presidential election? Well, it wasn't easy.

In January of 1995, sophomore year of college, I found myself on a listserv run by Antonia Stolper and her husband Bob Fertik, among others. It was a feminist response to the 1994 GOP take over of Congress. It was mad, it was informative and it was fucking awesome. To this day, I still have no idea how I got on, but it changed my life.

Women Leaders Online's newsletters gave me more information about what the hell was going on than the newspapers and CNN combined. Plus it came right to my inbox so that was nice. Then a discussion listserv popped up and my world imploded. I was instantly connected to veteran feminist activists in Westchester (NY), New York City, Wichita, DC, Louisiana and everywhere in between. Holy crap! We were debating the issues of the day and strategizing on how to rally for the next election cycle. WLO was the first online feminist organization and soon gave birth to the first pro-choice online voters guide. Sadly WLO folded a few years ago, but many of us are still in touch and are definitely connected to the organizations that are discussed in Beyond the Echo Chamber: How a Networked Progressive Media Can Reshape American Politics by Jessica Clark and Tracy Van Slyke.

I tell you my story as a mere example of how long this evolution has been brewing. Many models have been attempted to get to where we are today and progressives/feminists are still tinkering. Beyond the Echo Chamber is a great look at where we were, are and going.

And that's just the thing...We need to know how we got here, where we are in order to take the next step forward...together.

Clark & Van Slyke do a most excellent job at addressing the need for old school media to change, specially those who cling to the title and status of journalist. "Professional journalists will need to switch from an ethic of neutrality to an ethic of transparency and disclosure in order to work successfully with pro-am reporters (pg 121-122)." A simple web search turns up articles from 2005 about how the tension between journalists and bloggers is over...yet it's still debated & discussed.

They are outlined a cautionary tale about going for power. A lot of feminists have been tossed to the side in the political realm in order to get to a Democratic Congress and White House. The tune we kept hearing was, "Once we're in power, Roe and all that will be safe." I still hear that echoed today as Illinois Dems appear to be bracing themselves for losing the Senate seat once held by President Obama. I can't get one of my Dem friends to tell me why I should vote for Giannoulias based on his record, not scare tactics about Kirk or the Supreme Court. This harkens back to the emergence of the Blue Dog Democrat. The Dem who could win a Red state/district and save the liberal way. Cause that really happened, right? On page 137, Kos is quoted as referring to this strategy as getting "more and better Democrats" and admits that at first, they want more and now they will focus on the better. Um, that's so gonna work.

My political commentary aside, Beyond the Echo Chamber is an excellent read for those of us swimming in all this Politics 2.0 stuff or those watching us from the sidelines.

This review is seriously late as the book came out in February, but if you still don't have a copy, GET ONE! And as always, I highly recommend getting a copy from an indie bookstore or Powells.com.


Disclaimer: The only payment I received was the copy of the book.

This month is Latino Book Month. To celebrate, I'm giving away three books to one reader. To enter, just comment on any May 2010 post by May 31, 2010. I'm too busy to make you jump thru hoops. Comment!
Labels: books politics reviews