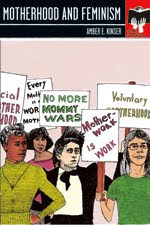 I doubt any role is more judged than mother. Add in sexuality, class and race into the equation and for some of us, we will never be a good mother. But what are we really comparing ourselves/each other to?

We are trying to live up to a myth. A myth of Biblical proportions that has been around for less than sixty years. Stephanie Koontz’s The Way We Never Were does an excellent job at debunking the myth of a “Leave it to Beaver” family and letting Donna Reed be our benchmark. Amber E. Kinser picks up that conversation and runs with it.

In Motherhood and Feminism Kinser outlines the evolution, both natural and government imposed, of the role of motherhood in American society. At the same time she is tracking the evolution of the feminist movement in the USA. Sometimes both areas collide, others they complement each other. And that is what is fascinating about this book – How easily motherhood and the role of the women in families can be shifted by outside economic pressures and government propaganda as well as how the feminist movement often takes its cue from how motherhood is framed.

During the first wave of feminism, it was obvious that many of the women who were engaged in the fight for suffrage took a look at themselves and s,aid, “Hey, women need the vote so we can be better citizens for our children and because women are just better people than men.” The theory that infusing women into politics would clean it up remains with us today. The fact that women could not ask for their own rights for their own sake, but rather used their children as the reason why they shouldn’t be left penniless after her husband dies, also remains with us. Consider how many mothers organizations fight for rights on behalf of children rather than for women themselves.

In many ways the fight for women’s rights has and continues to be fought in the home. The so-called Mommy Wars are a proxy for where a woman should be in society and not about the well-being of children. It is also a proxy for who is worthy of support. “How dare that woman take government money to stay home with her children when my husband works hard and I budget so I can be home?” The backlash against mom bloggers earning money, directly or indirectly through free samples, is yet another battle over where a woman’s priorities should be: her career or her children?

Kinser makes the point over and over again that not all mothers movements are feminist, nor do they want to be. It is honestly easier to get a thousand women to rally for children’s health care than to rally for their own health care that includes access to full reproductive health services. And that’s where the gruff lives.

I've talked with feminists who wished that mothers organizations would just claim the damn label, but I get it. And yes, it usually falls to the abortion question. Kinser has one of the BEST rationales on why feminism must include a pro-choice stance, no ifs ands or buts. I won't quote it, as you really should get the book. I think she does a good job at tackling moms of color, queer moms and low-income moms. This is not a history of white middle class feminist motherhood...Althou she correctly states that much of "mainstream" feminism and motherhood expectations are white middle class and then she rips it apart.

Kinser's book is well written and documents a shared history that many moms and feminists often forget or aren't even aware of. Without moms, we wouldn't have won the right to vote. Without feminism, moms wouldn't have the rights they have today. We're like peanut butter and chocolate...And some us are peanut butter cups.

Lastly, a lot of people have asked me if I teach, I don't. Some of those people then follow up with why not? Or you should. If I were to teach a class, I'd start by using this book. And I just might inquire about starting off with a seminar class. But I have a few other things to wrangle at the moment.

I've already said to go and get this book and regular readers know that I'm gonna ask you to please purchase from an indie bookstore or Powells.com. Now, what are you waiting for?

Disclaimer: The only payment I received was the copy of the book. Amber and I are also both in The Encyclopedia of Motherhood, but we have never met...at least that I recall. :)

This month is Latino Book Month. To celebrate, I'm giving away three books to one reader. To enter, just comment on any May 2010 post by May 31, 2010. I'm too busy to make you jump thru hoops. Comment!
Labels: books feminism motherhood