During the 16 Days of Activism Against Gender Violence, I was offered an interview with Carla Koppell, USAID Senior Coordinator for Gender Equality and Women’s Empowerment. As a student of feminism within the federal government, I jumped at the chance. As an activist who has seen first-hand what US policy can do to individual women, I jumped at the chance. Due to technical failures on my part, I won’t be posting this as an interview, but rather as a blog post about what I learned from Koppell about USAID and their role in advancing women’s empowerment around the world. And due to my unbelievably hectic life, this post took all this time to write up! 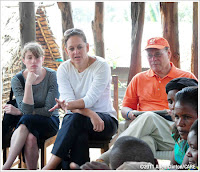 According to its website, USAID is the USA's humanitarian arm by working to protect human rights, strengthen democracy and assist in recovering from conflict, just to name a few of their goals. The Gender Equality and Women's Empowerment area is, well, focused on women's well-being.

Koppell told me that over the last year, USAID has completely revitalized the architecture around issues related to women's priorities and needs. There is a complete set of new policies and strategies on counter-trafficking (pdf), women peace and security (pdf), and combating and preventing child marriage (pdf).USAID was taking the opportunity during 16 Days to raise awareness, not just of the issues they work on, but to have more people realize what USAID is working on.

One of the issues I came out of my trip with the Nobel Women's Initiative was the lack of communication between the various governments and the people in the community. In Honduras I attended some meetings with government officials, both Honduran and from the USA. When the issues the women of Honduras were communicating to us, the government officials would dismiss them. Once someone claimed to have never heard any complaints! This is why I wanted to know if the USAID worked in the community at all. Koppell says they do work with the women themselves. And then addressed my second concern, that of imperialism. She responded by saying that gander-based violence is seen as human rights violations, which are codified in international conventions and treaties. Thus they are shared values in the international community and not just US values being imposed onto other societies.


“This isn’t about our values, but this is about making the voices of Afghan women, women within their societies heard. So they can define the appropriate space and the rights they want to assert in their society.” - Koppell

Koppell added that in many of these countries around the world, the polling shows that men and women believe women should have public roles and access to public education. The other voices, the more conservative voices are just the louder voices in the public discourse.

As someone who is often asked to mentor young women in terms of their feminist career paths, I asked her why a women's studies major should look to the federal government and specifically USAID. Koppell responded by underscoring, what she believes, is the great work that USAID does on behalf of girls and women around the world.

Putting my feminist activist hat on, what I saw in Mexico and Central America (and I was only there for 11 days!) did not convince me that an agency like USAID can really impact women's lives. And putting on my feminist scholar hat, I want to investigate this further. Is USAID too small to do any real good? Is it too hampered by US politics to do what it should/want to do? There are clearly flaws in the design, but where are they coming from? Where are their victories and how did they accomplish them?

I went into this interview with a lot of questions, came out with some left unanswered and some new ones to ask. I know there is a role for US-based feminists to play in empowering women around the world, what the role looks like is one that I am still trying to sketch out.
Labels: globalfeminism VAW