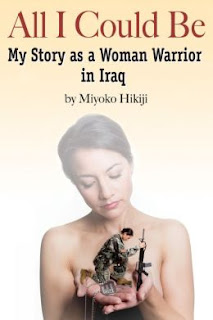 VLF is happy to welcome, Miyoko Hikiji, author of “All I Could Be: My Story as a Woman Warrior in Iraq” to the blog today. Since I am already at capacity for book reviews this summer, we decided a guest post would be the best way for you to get to know her. This is not an excerpt from her memoir, rather an exclusive essay for VLF.

Miyoko Hikiji joined the U.S. Army in Iowa as a way to pay for a college education. Near the end of her enlistment contract in the Iowa National Guard and before completing her degree in journalism, her unit was called to active duty in Iraq in early 2003. Good looking at 5’3” and 120 lbs., she didn’t “look the part,” but passed all of the qualifying tests, including weapons training and a 12.5 mile march in full uniform carrying a rifle and a 50-pound backpack.

The guys said it was a joke, but I wasn’t the only one that didn’t find it funny. The Iraqi men bartering for me, an American female soldier, weren’t laughing either.

It was July 2003 and US Forces had invaded Iraq four months prior. My Iowa National Guard transportation company was attached to an active duty combat unit that was responsible for securing the northwest quadrant of the country. This unit was armored cavalry, meaning tanks and helicopters. Our company, nicknamed “Hawkeye” after the University of Iowa’s team mascot, were the wheels that delivered the Cav’s supplies—everything from ammo and repair parts to mail and enemy prisoners of war.

I was one of about sixteen female soldiers in a unit of 150. I had worked hard early on to earn my place in its ranks, passing with flying colors the qualifications for physical fitness, weapons, first aid, land navigation and other soldier skills. I acted tough, maybe tougher than I was, never let my guard down and could hold my liquor, smoke and drink with the most macho of them. I didn’t want to be exactly one of the guys, but I knew if they called me this, I’d won them over. That reassured me that within my platoon, I was worth my weight in salt. I was proud of that fact.

It was the start of a typical mission day, simmering at around 100-degrees. We took respite in Ramadi where I used the police station’s bathroom to relieve myself. As I walked outside to rejoin my co-driver at the back of our truck, I noticed that a few other truck driving teams had clustered together and were talking with some of the locals that had approached. As I drew nearer my squad leader pointed at me and the Iraqi men flew into a bidding war.

“Two goats and two hundred American dollars!” a short stocky man shouted while waving his arms from underneath his traditional robe clothing.

“Two goats and three hundred American dollars!” a slightly taller and thinner man shouted. His unusual blue eyes were fixated on me in a glassy gaze.

“She’s a virgin too!” another staff sergeant shouted.

“Shut the hell up, sergeant!” I said in shock, tightening the grip on my weapon.

“Well you don’t have any kids, what’s the difference to them,” he said in a low voice. “She can give you many babies,” he continued grinning at the men, then me.

“What the hell are you doing?” I said looking around at my buddies. “You suck. You’re probably only worth two chickens and ten dinar but I’d damn sure sell you for that right now,” I said punching my co-driver in his shoulder.

“I’m not for sale!” I said looking over the Iraqis.

Then an eruption of angry Arabic dialogue filled the air, first among the Iraqis, then directed at the male soldiers still standing nearby.

A cold sweat broke across my forehead as I leapt up the sidesteps and into the driver’s seat. I fired the engine up quickly then looked back to see the other guys double-timing toward their trucks followed by the Iraqis with raised fists shouting, “Hey, Joe. What about the deal? Hey, Joe!”

The convoy commander gave the signal to move out and hopped in the passenger seat of his Humvee. The lead vehicle lurched forward. I followed closely behind it as the convoy pulled back onto the main supply road. My eyes were fixated, watching the path of the vehicle ahead, scanning the roadside for rubble and trash or anything that could be used as a disguise for an improvised explosive device.

My thoughts returned to the sale, to my worth, which had turned 120 pounds of salt into two goats and four hundred dollars. The Iraqis weren’t just attempting to buy a wife, or sex or future babies or labor on their farm. They were purchasing my freedom. They were trading a couple livestock and a fistful of greenbacks for my choice to be in charge of my destiny and pursue my own dreams. They were operating under the rules of their culture, the only lifestyle they knew, and for that I could not fault them.

My battle buddies, however, my brothers-in-arms, were pretending to sell me and they could only do so if they assumed I was theirs to sell. Did they believe they owned me? Was I not their equal and their “sister” but a possession? Did the push ups and muscle aches and miles of ruck marches in a downpour and the tears and heartache of this life boil down to just a joke?

So maybe the joke was on them because I realized that my worth was immeasurable. I was priceless. We all were. It was that American ideal, not some political conviction, that motivated me to gear up and head out for another mission. It was that faith that I was not just a number or some female or another GI, but a life worth living; no, I was a life worth celebrating.

I’d decided all this by the time our convoy was pulling inside the forward operating base where we were dropping our supplies One promise I said to myself that I’ll never forget: don’t underestimate yourself. You’re worth more than any man can afford.

Support Viva la Feminista by purchasing "All I Could Be" from  Powells.
Labels: books military VAW