Book Review: The Book of Jezebel 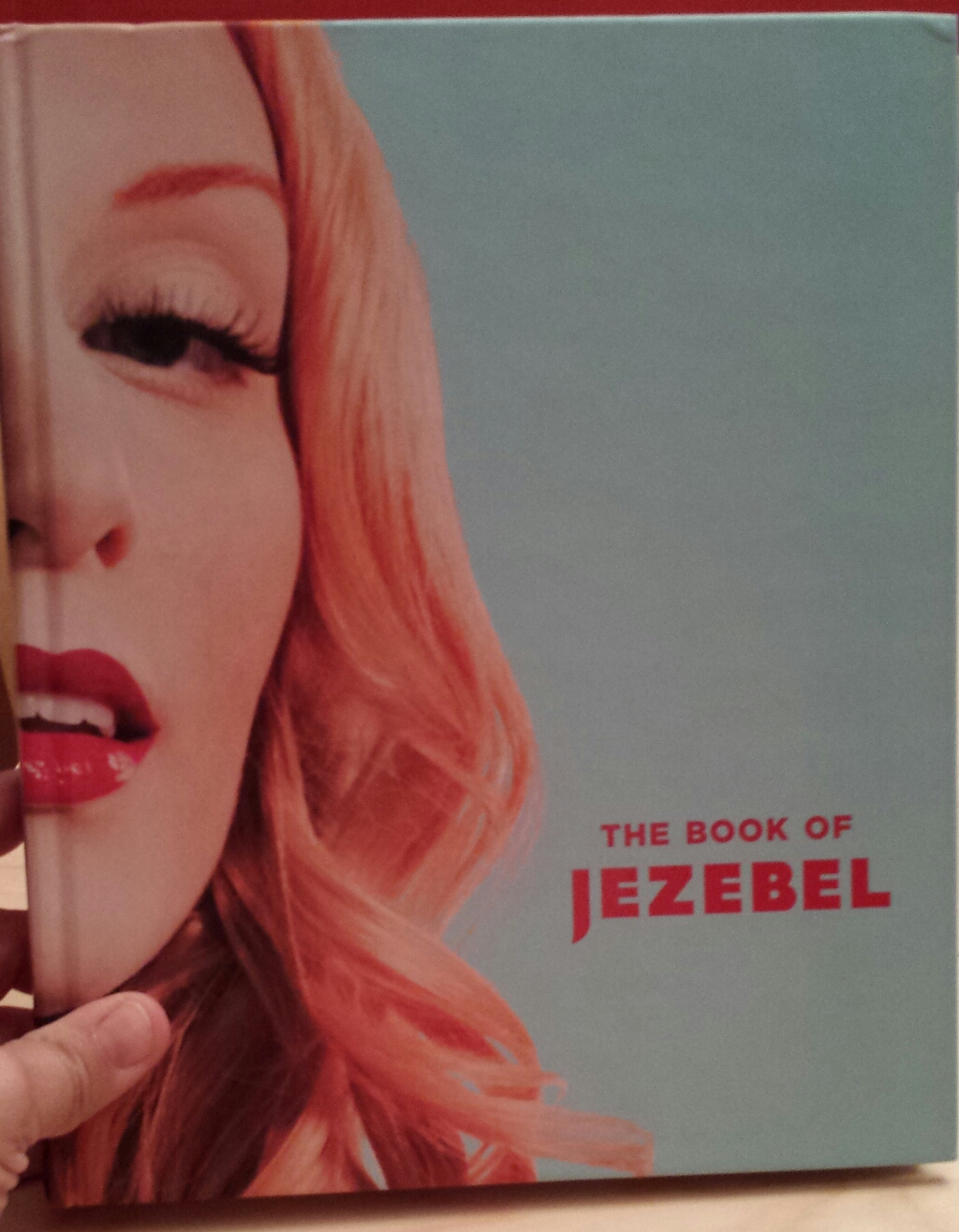 The Book of Jezebel, edited by Anna Holmes and written by Kate Harding and Amanda Hess has been called a feminist text/coffee table book that will be on the coffee table of every third-wave feminist. NPR suggests you choose it over the latest Bridget Jones book! I suggest that you should instead send the $27 to your local abortion fund, Planned Parenthood or other fave feminist organization.

I rarely ever write a negative review of a book. But I feel compelled to write this review because:

Basically, I wanted there to be a review that said, "We can do better feminism."

Is Jezebel a feminist blog?
The first question is if this is even feminism in play at. I ask this because sometimes a Jezebel writer will flatly state or respond on social media to criticism by feminists by saying it is not a feminist blog/site [1, 2]. If you read reviews of "The Book of Jezebel" or interviews with Holmes, Jezebel (site) is clearly identified as a feminist site. And when Jezebel recently published a post praising a new R. Kelly song, Colorlines called Jezebel an "allegedly feminist blog." Many others have called into question Jezebel's feminist status over the years. So is it a feminist site or not?

When I pointed this out on Twitter, I was told that Jezebel can’t be held responsible for what other media outlets say about it. To an extent that is true, but saying that the site is a “women’s site with feminist sensibility” is walking a very thin line. And on Jezebel's about page, you learn more about their comment policy than their philosophy. That's why I asked, over email, the founder of Jezebel, Anna Holmes, if she started Jezebel as a feminist site and she responded:

What it is (IMO): A website with a *feminist sensibility*, one for which feminist issues are important but not sole reason d'etre. I created it to be a pop culture and politics website that would look at issues from a critical but non-academic feminist POV.

I think that Katelyn M. Wazny says it best in her 2010 paper on Jezebel: “Despite the original intent of the website, Jezebel has become a feminist website in its content and character, and one that seems poised to further contribute to developing the thoughts of feminists online for the foreseeable future.” One cannot claim to reignite feminism, help to make it fun and at the same time disown the label for the kindling to that flame.

Jezebel cannot continue to run from the feminist label when they are being held accountable for what it publishes. It has proven to be as much of a feminist outlet as Bitch, Ms., and Feministing. Some may disagree with its feminism, but it is a feminist blog site. And one where many non-feminist-card-carrying women get their lady news from. In two interviews done with Anna Holmes about the book, Jezebel is identified as a feminist site - one with Jill from Feministe [...there's little argument today that Jezebel fits on the list of mainstream, popular feminist blogs.] and one with Mikki Halpin at Glamour [...a snarky, sharply funny website that provides a feminist viewpoint on everything that's happening in the world...].

Thus any book that is being framed as the physical branding of the website must be evaluated as to how well it upholds a feminist ethic.

The Book of Jezebel

Admittedly, as a critic of Jezebel, I went in wanting to not like the book. I tried to talk myself into being fair, especially after I saw that Kate Harding was a lead writer on it. As a disclaimer, Kate & I went to high school together, have hung out a few times since reconnecting at a Shakesville meet-up and she's bought Girl Scout cookies from my daughter. I also admire her brilliance. So the book can't be that bad, right? I went right for my personal music moment in the book...To the L's!

WHAT?! No Lilith Fair? OK, they covered it under Sarah McLachlan then...WHATTHEFUCK?! After cryptically posting to my FB page about this egregious error, I was told that an online second edition would be created and this error would be corrected. And it has. While I won't spend time outlining every person or idea I feel was left out, I will say that I do not think those left out on purpose, but as Anna Holmes points out in an interview with the Washington Post, "just were not thought of."


Thus began my journey to read the book in order, cover to cover. Come on with me as I Frodo this book...

It starts off strong with a full-page photo of Bella Abzug. Then I read the first entry on Aaliyah. Oh, my...I was not a huge fan of Aaliyah, so for me to read it and think, "This does not do justice to her legacy," says a lot. So let's move on my precious...We get to a pretty good entry on Abigail Adams. Jezebel defines her as "the baller behind President John Adams who was the real brains behind the American Revolution (p 6)." I chuckle. Then I hit "adoption" and I throw the book like Frodo tosses the ring:


"If you're pregnant and cannot raise the child yourself, antichoicers would have you believe this is a relatively easy process and morally superior alternative to abortion, even thought it means enduring forty weeks of pregnancy, labor, and any complications that might arise from those, then handing the baby over to stranger while you're physically exhausted and maximally hormonal (p 6-7)"

Now I've written about adoption before and the idea that feminists are best suited to look after the birth mother. I think everyone should read, "The Girls Who Went Away," before saying adoption is the best choice for an unwanted/planned pregnancy. But this description is offensive and not just in the normal Jezebel offensive manner. OK, deep breath...let's keep moving.

Overall I did end up pretty "meh" about the whole book. There are some excellent entries (A League of Their Own, Buffy Summers, Venus & Serena Williams, and Princess Diana), but also some low points such as summing up Deidre McCloskey's awesomeness with this entry: "As far as we know, the first out trans woman who's also a famous economist (p 179)." For me, she's important to know because lately she's been calling into question the idea of "statistical significance" and I think as feminists, we like people who question science in a manner that ensures that good science prevails.

I asked a few #NoJez folks what they would look up in "The Book of Jezebel," and the most requested idea was cis/transgender. I will say that I think their entries on these terms are fairly good despite the McCloskey entry.

But overall, the "meh" feeling came from a sense that some entries were just super shortchanged. That some individuals received well-rounded entries and others did not. I know not every entry can be perfect, but some glaring omissions did occur:

I also feel that the time and energy given to riot grrrl over all other musical genres was short-sighted, to say the least of the amazing feminist work in hip-hop, country and rap, not to mention the aforementioned Sarah McLachlan and her contemporaries. There were also entries that were rightly critical of the person or idea (Helen Thomas, Naomi Wolf), but others did not get that same critical eye (Gloria Steinem, SlutWalk).

Overall, "The Book of Jezebel" is uneven in how it treats lady things, presents some ideas in too snarkastic of a light and overall is just ok. It's not a terrible book, but if you are looking for something to give a young woman who might need a nudge towards claiming the feminist label there are plenty of other gift ideas.