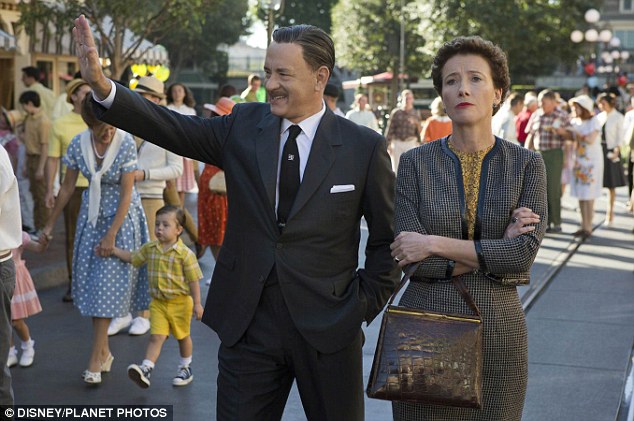 Ella & I saw the trailer to "Saving Mr. Banks" before "Frozen"...I think...anywho, we saw it, looked at each other and knew we had to see the movie. We were so sold on it, due to our love of "Mary Poppins," that I didn't even do research on the movie. So when we went to see it we were unprepared for the actual movie.

We went in expecting to see a funny & sweet movie about how a control-freak author deals with Disney's team of screen & song writers to create the masterpiece Ella & I love. And in all honesty, this is kinda what you get with the movie.

But within the first five minutes, I smelled a rat. I know, I know, what else should I expect from Disney? I'm not that cynical. But the depiction of P.L. Travers, the author of the series of Mary Poppins [disclaimer: that's an affiliate link there] books, was just down right one-dimensional that I knew too much was missing from her side of the story.

Since our viewing two pieces have hit my social media feed that call out the depiction of Travers.

Victoria Coren Mitchell writes that Travers would be spinning in her grave over this film. Mitchell created a BBC biopic of Travers that delves into Travers' unorthodox journey into motherhood (Saving Mr. Banks leaves you with the sense that Travers was afraid of motherhood) and the aftermath of the success the film had for Travers. Mitchell writes of the contradiction Travers was...of a woman who was controlling of her art in every regard, not just with Disney, but at the same time left it up to astrology to select her adoptive son.

Amy Nicholson takes a stronger stance on the sexist portrait of Travers that the Disney film paints. She writes that "...Travers was a feisty, stereotype-breaking bisexual — a single mom who adopted a baby in her 40s, studied Zen meditation in Kyoto, and was publishing erotica about her silky underwear 10 years before Walt had sketched his mouse."

Neither Nicholson nor Mitchell reject the idea that Travers was a control freak. Mitchell contends that Travers held too tightly to her dark stories and was unable to see that to bring the characters to a movie screen, had to lighten them up. Perhaps today someone could bring a true Mary Poppins to the screen. But as Nicholson points out, it can't be a Yankee...that was written into Travers' will.

From these two short pieces on Travers, one can truly see that Travers was far more complex than just a brokenhearted Daddy's Girl who rejected the decadence of having cake towers at writing sessions. Yet, I wonder if the true Travers was not quite the heroine that some are reaching for. Sometimes I feel that in our journey to point out sexist depictions of women in the media, we are too willing to label someone a hero.

For the record, I think "Saving Mr. Banks" is an excellent movie. Colin Farrell steals the movie with his depiction of Travers's alcoholic, yet loving father. It is definitely flawed, but as a story it is beautiful. Emma Thompson shines as always. I was just telling a friend, only she could make me love a clearly problematic depiction of a woman. Seriously, despite knowing zilch about her, I knew the Travers in the film was mostly bullshit, yet I still loved Thompson's portrayal!

Now to see if I can watch the BBC biopic on Travers...She seems like a mystery I need to unravel.
Labels: feminism movies reviews