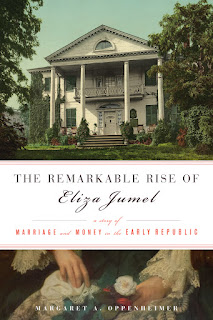 I get a lot of books pitched to me and some are even sent right to me. 95% of the time the books sent right to me are pretty far off from the books I find enjoyable. But every once in awhile a publicist gets me. And while I currently do not have time to read and review this book, I read enough of the book to earn itself a quick blog post. Plus I get to give you a nice morsel of the book to whet your appetite!

The Remarkable Rise of Eliza Jumel: A Story of Marriage and Money in the Early Republic by Margaret A. Oppenheimer sounds as scandalous as anything in ShondaLand or what reality TV could think to manipulate. What I got from the prologue is that the story of Eliza Jumel may come down to telling the tale of a gutsy woman who wanted everything in life and was not afraid to go after it. She had gumption and I'm sure a F-U way of carrying those big Colonial-era dresses. I'm not sure if I like her as a human being, but I'm sure she makes for a great story. Enjoy.

In 1873 New Yorkers following the courtroom battle of the decade could read a short update in the Commercial Advertiser:

It may be gratifying to the relatives and friends of the luckless jurors engaged in the trial of the JUMEL will case, to know that that company of wretched men still exists—not healthy nor happy, but alive and patient. It is altogether impossible to say when the fight for the estate will end; but it is to be presumed that the jurors profited by the hint they received, and by settling up all their worldly affairs, prepared themselves for a gradual and peaceful descent into the tomb. Court, counsel, and jury are becoming old and gray.1

The fight over the Jumel fortune began in 1865, after Eliza Jumel died in her ninetieth year. It raged on into the 1890s. As the years passed, Americans from Maine to California marveled at the stories woven around the amazing Madame Jumel, who rose from grinding poverty to enviable wealth. Family members told of a woman who earned the gratitude of Napoleon I, shone at the courts of Louis XVIII and Charles X, and fought valiantly to recoup her first husband’s fallen fortunes.2 Claimants to her estate painted a different picture: of a prostitute, a mother of an illegitimate son, a wife who ruthlessly defrauded her husband and perhaps even plotted his death.3 The parties agreed on but a single fact: “she was for a short time the wife of the notorious Aaron Burr.”4

Which narrative should we believe today? Over the course of Eliza’s tumultuous afterlife as the star of a courtroom drama, the facts of her life were obscured beneath libels and legends. Her real story—so strikingly unique that it surpasses any invention—has yet to be told.

The child called Betsy Bowen, who became Eliza Jumel and later Mrs. Aaron Burr, was raised in a brothel, indentured as a servant, and confined to a workhouse when her mother was in jail. Yet by the end of her life she had servants of her own, a New York mansion that stands today, a summer home in Saratoga Springs that survives as well, and several hundred acres of land. She was America’s first major woman art collector, forming a collection of 242 European paintings. She raised a niece, great-niece, and great-nephew to adulthood and arranged good marriages for both the girls. She married twice herself, above her station, without family connections to ease the way. She used marriages and money to improve her social standing and the legal system to protect her financial security. When she died, her estate was worth some $1 million dollars, comparable in buying power to $15 million today. She even managed to do what Alexander Hamilton could not: she triumphed over Aaron Burr.

Her life represented an extreme rarity for her era: a rags-to-riches story, female version. One of the foundational beliefs of America was that a boy who grew up poor could work his way up to fame and fortune.5 Although the truth was more nuanced—relatively few poor boys rose into the social and financial elite—the United States was still the country of self-made men.6

But there was no comparable myth for young women. Working hard didn’t translate into opportunities for girls, because the available jobs paid badly and afforded little or no upward mobility.7 Marrying up wasn’t easy either. Potential husbands for poor girls were nearly as impoverished as the girls themselves. It took a woman like Eliza to break the mold. Intelligent, determined, sometimes difficult, she had the strength to seize opportunities and readjust facts to achieve the security and status she so desperately craved.

To understand her unique achievement, we must begin in Providence, Rhode Island, with the young girl who was known as Betsy Bowen. Watch vigilantly as she steps onto history’s stage, because the echoes of a riot blur the sound of her voice.

Please purchase a copy of The Remarkable Rise of Eliza Jumel from Powells or Indiebound and support this site.