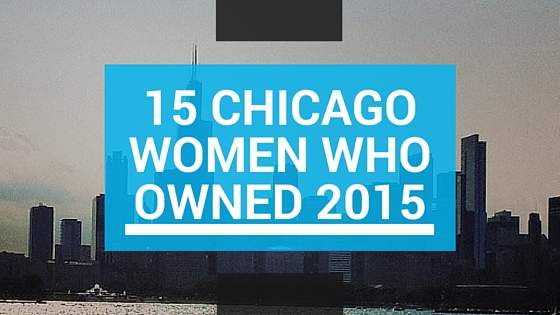 When I asked social media which Chicago women kicked ass in 2015, I got a list far too long to do justice. I also realized how many of my lady friends kick ass every day, but it's a constant kicking of the ass, not a lot of headline kicking. Ya know what I mean? So I tried to make this list a mix of Chicagoans who had some headline kicks and some who kick ass every day and deserve a shout out. Let's get started, shall we?

Luvvie did my job and summed up her amazing year herself! I love it when women do that. Yes, let's take a moment to reflect on our accomplishments and dance at our own parties. Luvvie makes us laugh, even when we want to cry. She pushes us to be active, even down to our shoes. You'll never laugh so hard when learning so much than when you are in a meeting with her. From hanging with celebs to her epic travel schedule, Luvvie definitely owned 2015.

Carruthers is on a lot of lists this year for her leadership of the Black Youth Project 100. Chicago's response to police killing young people of color, particularly young black men, did not begin with the Laquan McDonald tape. No, Carruthers and her posse of social justice warriors have been organizing Chicago's youth of color for sometime now. Many credit this larger organizing as to why Chicago's reaction to the McDonald tape was swift, pointed and why Chicago did not burn. And while most media is focused on black men and boys, BYP100 continues to say the names of the many black women and girls also killed by state violence. When allegations of rape were made against a BYP100 leader, Carruthers and the organization took those seriously by not only meeting with the survivor, but suspending the accused: "As an organization rooted in a Black queer feminist framework, we take reports of sexual assault extremely seriously." That's what feminist leadership should look like.

Keidra is a good friend, but that shouldn't stop us from celebrating her accomplishments this year! For 8+ years she has run, The Learned Fangirl, a smart, feminist take on pop culture and all things geek. To celebrate 8 years, Keidra announced that TLF had received a grant and a fiscal sponsor in order to PAY writers (ZOMG, right?) and to take TLF to the next level. I know how hard she must have worked to get to that moment. She also gave a fab talk at the National Women's Studies Association conference.

The sole woman to nominate herself on my FB wall was Ana Fernatt. She hosts the podcast "Champagne & Snark." Fernatt invites interesting people to drink champagne while discussing their work and impact in the world. I thoroughly enjoyed listening to her conversation with Alysse Dalessandro, whom I met years ago at some Chicago feminist gathering. This is not a clean, hi-produced podcast but the rawness suits the conversations.

A friend and supporter of #365FeministSelfie, Guth started 2015 quitting one of her many jobs to pursue more jobs! Now you know why I love this woman. One of her new projects is to create a documentary series about online harassment...which quickly got her a lot of online harassment! I'd say she hit a bulls eye there. Guth gave AWJ-Chicago, where she serves as president, the scoop on her 2016.

When I first started engaging in the feminist activist community, it was very white. As the Latina, I was often asked to bring in other Latinas...cause ya know, they follow what I say! National organizations are not only very white, but very East Coast (NYC or DC). That is why the hiring of Yamani Hernandez as the new executive director of the National Network of Abortion Funds is kick ass. There are so many reasons we need a WOC leading this network, especially as we try to repeal the Hyde Amendment. Can we dance a little that a major feminist and reproductive justice org is now being lead from Chicago?!

Over two years ago Karp published an investigation into a no-bid contract given to the former CPS superintendent's former employer. Those of us fighting for better public schools in Chicago read it and shook our heads. What will ever come of it? How about a guilty plea by Barbara Byrd-Bennett? Not shabby by someone who was practicing actual journalism?!

Long time readers know that I've been a fan of Carol Marin for years. And she definitely falls into the category of "consistent ass kicker." This year we saw her be one of the leaders for the investigation into Laquan McDonald shooting. Marin tries to not only hold Mayor Emmanuel accountable for his decisions, as well as remind us voters of what is happening under his leadership. And that is something we need to remember as we head into an election year. Marin can hold him accountable via the media, but if we keep voting the way we do (or not voting), there's little she can do about that.

The new owners of Women and Children First have earned a gold star for their first year on the job! A beautiful remodeling of the space gives us book worms new places to curl up with a book and more open space to spy our friends who are also hanging in the bookstore. If you know me, you know that this is my bookstore and Sarah & I are friendly. I've moderated conversations there in the past and will be doing my first book talk on January 27th.

In 2013, Ortiz filed a Title IX complaint against the University of Chicago over their mishandling of her reported sexual assault. She went on to found, Phoenix Survivors Alliance, to support other sexual assault survivors at UofC. In September the Chicago Reader published a multi-page, kick ass, feature on Ortiz and others' activism to change how U of C deals with and tries to prevent sexual assault. There were few places you could go in Chicago without seeing the crimson red cover with "DON'T BE A RAPIST" in large white letters.

Pallares is director of the UIC Latin American and Latino studies program. Up until this past year, I have mainly admired her work from afar. I like to tell people that UIC is chock full of activist-academics and Pallares is no exception. From the publication of her latest book, Family Activism  Immigrant Struggles and the Politics of Noncitizenship, to her leadership to gain undocumented students access to financial aid, she took 2015 by storm. Listen to her comment on Ecuador's attempt to implement an inheritance tax.

The President of Cook County started out 2015 in what many thought was weak by not running against Mayor Emanuel (I seriously overheard someone the other day saying she wimped out) to ending with fierceness by launching her former chief of staff, Kim Foxx, to challenge beleaguered Cook County State's Attorney Anita Alvarez. She also stood with Cook County Commissioner Chuy Garcia to call for Alvarez and McCarthy to resign.

As director of the Latino Policy Forum, Puente has been busy in 2015. She started off the year commenting and analyzing how the Rahm vs. Chuy race would not only end up, but impact Chicago's Latino communities. Puente chimed in when the lone Latino was booted from the Chicago Public School board. Given that 2016 is another election year, she'll be plenty busy discussing if and how Chicago and Illinois' Latino communities find their way to the polls.

You know how some health centers and clinics that provide abortion services often get protesters? Anti-women folks who want to scare the women seeking services into obtaining health care? The mighty who help those women as they approach and enter the clinics are clinic escorts. But how is a scared woman to know which of those standing outside a clinic is her friend and not a foe? Vests. And in 2013 long-time clinic escort Benita Ulisano started, The Clinic Vest Project, an organization that would help clinics around the country obtain vests for their volunteer escorts. "The mission of the Clinic Vest Project is to provide FREE clinic escort vests to groups that service facilities that support the full range of reproductive health options including safe and legal abortion." This year I've proudly watched as Ulisano was interviewed around the interwebs and receiving the accolades this long time reproductive justice warrior deserves.  ​

I had heard the name floating around over the past year or two, but upon further inspection, Vasquez is clearly kicking some ass. First, she's been vocal as a mom of a child with autism. Second, she inked a deal with ABC to create show based on her life:


The Better Half, inspired by Vasquez’s family, centers on a Mexican-American working mother who is a well-intentioned and sometimes-misguided citizen disrupter. She tackles the small and large injustices around her for the greater good, even though many times no one asks her to. Her well-meaning actions create consequences that affect her career, community and home life in the crowded Chicago brownstone she shares with her parents, husband and children.

If ABC isn't scared to be real outside of reality TV, Chicago's activist mom community will give Vasquez plenty to portray.

15 fabulous Chicago ladies is not enough to paint the picture of the amazing and transformative work being done in this city and region. Please share your pick for a Chicago woman who owned 2015 in the comments and do include links to her organizations so we can all find some new places to support in 2016.
Labels: chicago latina