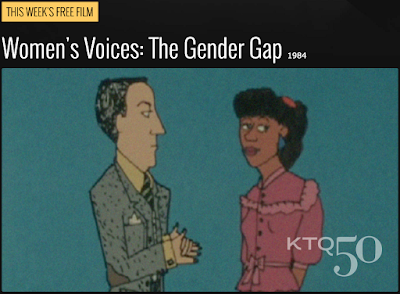 To celebrate their 50th anniversary, Kartemquin Films is releasing films to download for free! This week the film is from 1984 and "explores the growing difference in the voting patterns of men and women (the gender gap) that could no longer be denied by the mid-1980's. Issues like compensation equality, environmental preservation, subsidized childcare and healthcare became wedge issues in Ronald Reagan's America as more and more women joined the workforce." It is wonderfully illustrated by Nicole Hollander. At the end of the film there is an update on the issues from 2012. It is pretty sad how much the 1984 film is still relevant in 2016, especially considering Donald Trump's "woman card" comments.

You can view the film online below, but if you visit Kartemquin Films you can download the film for free and own it forever!