For Cubs fans past and present 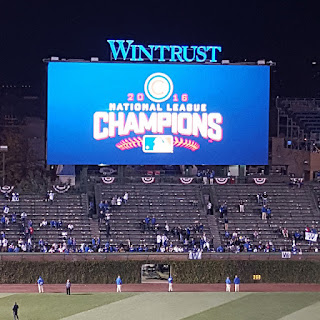 I have been an emotional wreck since Saturday afternoon.

After we got done with our daughter's soccer match (for the record they lost) I focused on game 6 of the National League Championship Series (NLCS). My Cubbies were heading into the do or die game in a few hours. And yes, while I know there was a game 7, I knew that momentum is on the victors side. If the Cubs somehow lost, I can imagine the Dodgers steamrolling us in game 7 and thus crushing all of Cubs Nation once again. Nerves overcame me. Anxiety was all I could feel. Nausea replaced any appetite. My husband landed last minute tickets and I immediately regretted it. Despite the historical nature and "once in a lifetime" nature of the game, I started to say, "I don't want to go. I can't go." I had the same feeling, times 10, that I get just before the Superman roller coaster starts. I told our daughter, "If they lose, you'll have to carry me home." I knew I would not be able to handle being there to watch our dreams evaporate.

My husband, our daughter, and I got on the Red Line and headed to Wrigley Field. My husband asked many times if I was ok. Apparently anxiety stole the remnants of my summer tan to leave a ghost. I swallowed and said, "I'm ok," in an attempt to convince myself.

But once we got into view of the Friendly Confines its magic started to set in. This was my happy place, despite being there for far too many losses. This is the one place I definitely want my ashes spread. We walked around to look at the merchandise, but committed to not buying anything until "this is all over." Not after we win, but when it is over. No jinxing allowed. I did take a photo of the Eamus Catuli sign because I knew it would change no matter what. 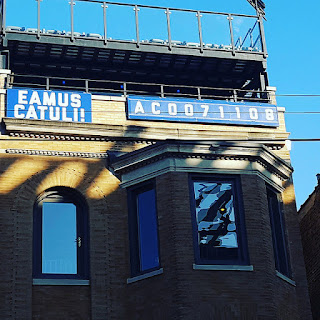 Now we are safe inside one of the holiest places to me. Our rally towel in hand, my scorecard purchased, and a peek at batting practice. Kudos to the crew who picked the music. It's all perfect. As the game moves along and I'm keeping score, watching us take out the Dodgers 1-2-3 each inning, the feeling starts to build. This might happen! 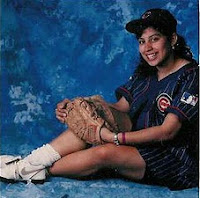 Then the life flashbacks start to happen. Am I dying? Nope, the Cubs are merely inching closer to winning. The entire game I wished my dad was with me. He's the reason I am a Cubs fan. Many summer days were spent watching games on TV. Many days of school were spent ditching to head east to Wrigley Field. Ironically the Dodgers were one of our fave teams to go watch as I was a kid during FernandoMania. When we would sign guest books on vacation he'd add, "Go Cubs!" But he moved to North Carolina almost 20 years ago and there wasn't time or money to get him to the park in time.

I also thought of my mom who died 13 years ago. The long-suffering spouse to a Cubs fan who had daughters who grew up as Cubs fans. She eventually learned to love the Cubbies and enjoy coming out to the park with us...as long as it wasn't an icy Opening Day. How she would have enjoyed watching us lose our mind over this season.

The next morning I walked out to our alley and ran into the woman who lives behind us. "The Cubs won last night!" she reported. I told her I knew, we were there. "We finally had enough angels to make it happen." Her husband who died a few years ago was a huge Cubs fan. I couldn't bring myself to say, "Frank would have loved it." I can barely type it! I remember my husband & I talking to him shortly before he died about maybe, maybe the Cubs would win before he passes. Alas. Then I thought of a friend whose dad recently died. Then I was drowning in ghosts of Cubs fans before me. Thinking of those of us who were carrying our lost dads, grandmas, and best friends into the stadium or sitting with us on the couch.

For most of us, we cried on Saturday night because we never believed we would live long enough to hear the words, "The Cubs are going to the World Series!" But we also cried for those who did not.