Starbucks Not Serving Up Their Baristas

I've been mentally obsessing over the story of a teenage woman being hit on at a Spokane Starbucks since it went viral a few days ago. The virality of the story seems simple enough - a 34-year-old guy thinks it is ok to ask out a supposed 16-year-old - the internet seems to think otherwise. He gets labeled gross old dude and we feel better about ourselves for being outraged.

I also think the outrage is amplified because many of us are on edge because Donald Trump, a man with a long list of sexual assault accusations, will become the next President of the USA. While his actions clearly did not offend the large group of women who did vote for Trump, the majority of women who did not vote for him ARE PISSED. And if we cannot keep a man who likes to brag about grabbing women by the genitals out of the White House, we can at least be pissed as hell when we see men acting as if women, of any age, are available just because men want them to be.

But what many people, including some women, do not understand is that this type of situation happens every day for women in the food and service industry.

Last summer UNITE HERE Local 1 released a report, Hands Off Pants On, about the epidemic of harassment and assault in the service sector. They cited a 2015 national survey of "2,235 full-time and part-time female employees and found that 42% of women surveyed in the food service and hospitality industry reported sexual harassment, the highest of any field." UNITE HERE Local 1 went on to drill down into the situation here in Chicago with shocking results. 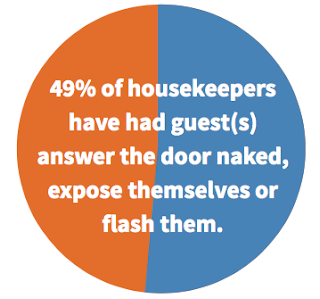 Yet we do not hear stories of other service sector workers being harassed or assaulted on a daily basis. Why? I believe it is because 1) these women do not report for fear of retaliation or as the report states, they feel nothing can be done and 2) the age difference in this Starbucks incident set off people's outrage mode quicker than if the guy in question had written a creepy note to a woman of his own age. UNITE HERE Local 1 also points out that "[j]ust 19% of hospitality workers surveyed said they had received training from their employer on how to deal with sexual harassment by guests."

Reporting sexual harassment in the service sector can often be confusing though. With the existence of restaurants like Hooters and their copycats that make their women servers wear revealing outfits more suitable for Vegas, it is no wonder that men can think that a teenager laughing at their stupid joke is flirting. Women flirting to get through to their job is part of what is called emotional labor.

Emotional labor is all the smiling, the "yes, sirs", and the giggles that women must do to fulfill their duty as customer service. The customer is always right, even if he is a skeezy old dude hitting on a barista who is just trying to remember which mocha gets soy and which gets whole milk.

What happened with this teenager at the Starbucks is not a new occurrence. It happens all too often and we fail to recognize it. Some of it is friendly emotional labor, it is still labor. It is not just being polite when I go into my local coffee shop and the barista I see almost every day knows not just my order, but every regular's order. Let's keep that in mind as we head out for our morning coffee, panini at lunch, or quick stop dinner. This issue is a women's issue and a feminist issue. Not just for the skeezy dude hitting on a teenager, but for every worker who has to put up with unwanted touches, looks, and comments.
Labels: feminism work