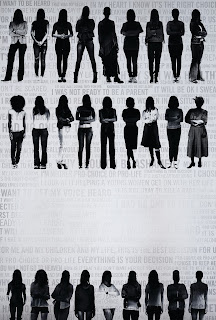 According to the CDC,  664,435 legal abortions were performed in 2013. The Guttmacher Institute states that in 2014 1.5% of women aged 15-44 had an abortion. On average 1 in 3 women will have had an abortion over the course of their lifetime. This makes abortion or pregnancy terminations one of the most common surgical procedures, but most likely the only medical procedure that requires armed guards to ensure the safety of professionals performing them. The virulent attacks against reproductive justice - including medically accurate sex education, birth control, and abortion - has resulted in an atmosphere of fear. Fear that providers are assassinated in their churches or homes. Fear that providers being harassed outside their own homes. Fear that loved ones won't understand. This has resulted in silence.

In Abortion: Stories Women Tell these stories are here for consuming. We hear from women who have had abortions and now work in clinics to support other women. Women who regret their abortions and who are now those harassing women outside of clinics perpetuating abortion stigma.

For me, the most touching scenes are with those who chose adoption. The debate over abortion is often pitted against having one and not having one as if carrying a pregnancy to term is easy. But pick up an adoption narrative and one will know that allowing your child to be adopted is a tougher choice for many people. In fact in one scene the mother of a young woman admits that she could not be with her daughter as she gave birth because she needed to keep an emotional distance in order for the adoption to take place. That young woman made a decision to carry her pregnancy to term and her mother could not find the strength to be at her side as she gave birth and let her child join a different family. That is heart-wrenching. That pain is often ignored when anti-abortion advocates and law-makers scoff, "Just give it up for adoption!" as if it was as simple as dropping off a bag of donated clothing.

Abortion: Stories Women Tell beautifully highlights how abortion rights, especially in light of waiting periods, is a class issue. Considering how in the immediate aftermath of the 2016 election pundits waxed on about the Democrats returning to economic issues and dismissing race and "identity" politics, few of those economic Democrats are running to include reproductive justice under the economic tent. Keeping the economics of "choice" out of the framing of our political agenda leads to not only Democrats throwing reproductive justice under the bus, but allows for upper class white women to think they are safe even if they vote for Trump. It also leads to the young white woman we meet who organizes against abortion even though she had zero personal experience with someone who had one. I bet she has a friend who had one, but can't trust her enough to reveal themselves.

This is not an easy documentary to watch. It is emotional and you will most likely cry and scream at the TV. I'm holding back tears as I write. But this documentary is one you must watch, especially for those in the mushy middle of the debate and don't have a friend who has outed themselves as having had an abortion. Tracy Droz Tragos, the director, does not pass judgement on those who fight to make abortion harder to access, but the humanity they provide to the women who do choose abortion is fiercely feminist and pro-reproductive justice.

In light of the class issues discussed in this film and my longtime activism to support those who choose abortion, I am asking you to please donate to my effort to support the Chicago Abortion Fund who financially assists those seeking to terminate their pregnancies. Thank you!
******