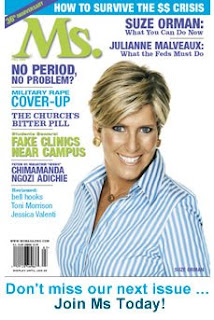 And it is not just because Suze Orman is on the cover with that rock star smile of hers. Why should you pick it up? BECAUSE I AM IN IT!

My review of Yes Means Yes! Visions of Female Sexual Power and a World Without Rape, edited by Jaclyn Friedman and Jessica Valenti is in there! OK, sorry I keep screaming, but I can't believe that in the last six months my writing (and not a letter to the editor) has been in both Bitch and Ms.

You have to pick up the issue or wait for it to find your doorstep to read the full review, but I want to give some mega kudos to the four of the many authors who bowled me over. Lisa Jervis, Latoya Peterson, Cristina Meztli Tzintzun, and fellow Bronco Kate Harding. Don't take the fact that I know three of these fab writers as bias. First I'd never kiss Lisa's ass, she could see right thru it. While Kate & I did go to high school together we didn't hang in the same circles. As for Latoya, well, she'd kick my ass if I lied about her writing. Now to meet Cristina...

The book did have a few pieces that honestly read like really long blog posts, but I pride myself on my honesty and I wouldn't try to sell you, especially when I'm getting nada of the royalties, a book that sucked. There are pieces in this collection that are must reads pieces and pieces that should be included in many syllabuses for years to come. I never got through Backlash but I know a few women who have said that the book was their click moment. I think this will do the same thing for many people. OK, enough about the book. You gotta read the official review in Ms.

As for the rest of the magazine, here is what is in store for you:

The new issue of Ms. contains a number of other noteworthy pieces. The cover story, “Suze Orman’s Bottom Line,” offers timely advice from the financial guru on how women can empower themselves during the current money crisis. Accompanying that piece is “Jobs, Jobs, Jobs!” by economist and Bennett College president Julianne Malveaux, in which she spells out what the federal government must do to jump-start the floundering U.S. economy.

Other hard-hitting features in the issue reveal “The Scandal of Military Rape,” about the failures of the Department of Defense to stem sexual assault in the armed services, and the “Dangerous Masquerade,” about how so-called crisis pregnancy centers—which often receive government funding—promise counseling and health services to college women but conceal their real purpose: to preach often-inaccurate anti-abortion and abstinence messages.

Furthermore, the issue includes a rueful look at how the 40-year-old anti-birth control dictum of the Catholic Church, “Humanae Vitae,” has both lowered the church’s credibility in the U.S. and caused incalculable harm to women in development countries. Keeping to the birth-control topic, one of the columns in this issue, “Like a Natural Woman,” asks “What’s the real story behind period-suppressing contraceptives?” Finally, fiction lovers can delight in the short story “Hair,” by Chimamanda Ngozie Adichie, the Nigerian immigrant to the U.S. who recently won a MacArthur “genius” award.

Keep an eye on your neighborhood magazine rack...and while you're waiting, why not subscribe to Ms? Hey, the holidays are coming up, so give, give, give!

Don't forget that VLF is participating in the DonorsChoose Blogger Challenge. We already have one class funded, let's get that second one funded! The teacher is requesting funding to buy books by women authors. Also don't forget that I'm giving out goodies to a few select peeps who donate!
Labels: books magazine me reviews writing