Once upon a time there was a little girl who had big dreams. She was going to be an archeologist, a teacher, and maybe one day the President of the United States. She knew she wanted to get out of her small suburban town and see the world. When other girls were playing wedding, she joined in, but deep inside didn't think that she would ever find a boy who would marry her. She did dream about having children one day. A husband was always optional. Fast forward to early adulthood and the little girl did find a boy who said he would marry her and tolerate, some days love, her crazy feminista ways. They married in a tiny chapel in Las Vegas. And they left the hotel-casino to live their Happily Ever After.
¤º°`°º¤o,,,,o¤º°`°º¤o,,,,o¤º°`°º¤o¤º°`°º¤o,,,,o¤º°`°º¤o,,,,o¤º°`°º¤o

When I hear people talk about defending the institution of marriage, I wonder if my marriage would really qualify. Yes, as a woman I married a man, but we were not married in a house of worship, even thou the justice of the peace did throw in a lot of "God this and God that." I tried to change up the ceremony so that my dad was not asked "Who gives this woman away" because well, at 18 I left on my own accord, but the JoP still said it. I also thought about having both my parents walk me down the aisle, but was talked out of it. We were introduced as Mr. and Mrs. MYLAST name after we were married, which was a fun surprise for many reasons.

On Tuesday, one of the biggest election days for my generation, Californians will have even more responsibility than usual. The California State Supreme Court has already stated that equal marriage rights are the law of that state. Proposition 8 wants to repeal that and return California to discriminating against same-sex couples.

There are times in this country when the judicial system has failed us (Dred Scott) and times when it has pushed us into a new era (Brown v. Board of Education). 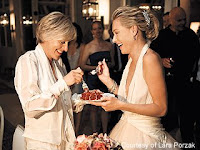 Like it or not, this country needed to get its collective butt kicked into this new era of equality and love. Because that's what it is - Equality for all those things us hetero-married folks take for granted and love between two people. How can anyone vote against love? Seriously.

California VOTE NO on PROP 8!!

Don't forget that VLF is participating in the DonorsChoose Blogger Challenge. We already have one class funded, let's get that second one funded! The teacher is requesting funding to buy books by women authors. Also don't forget that I'm giving out goodies to a few select peeps who donate!
Labels: actions feminism LGBT me